Death Light Of The Maria 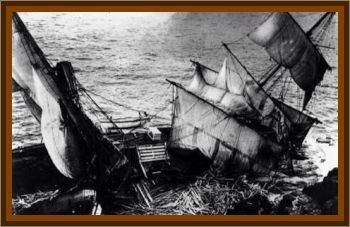 Perhaps the most ominous sighting of the ghost light occurred on the doomed 156 ton wooden sailing brig Maria which was shipwrecked on Bramble Reef in Queensland in 1872.

A survivor of the wreck, Mr T. Ingram recounted his experience to The Capricornian in February 1909. In his account, he spoke of a strange ghost light, apparently, visible only to those doomed members of the ship’s crew.

A curious incident occurred on the Maria before she was wrecked which may be referred to, though it savors of superstition.

During the time the Maria was being driven south by the monsoon, a dancing light was seen on the mast of the vessel, a sort of will-o’-the-wisp. This light the sailors called a ghost light, and stated that it portended some disaster. The light was seen for several nights, and the curious thing about it was that every person could not see it. Mr. Ingham, for instance, failed to see it, though his three mates pointed it out to him again and again. At length one of them said: If you cannot see that light yon must be blind.

However, Mr. Ingham was by no means the only one who could not see the light, and those who failed to do so could not make the affair out, as the others were so earnest about it.

When the eight saved on the raft were on shore, the matter was brought up, and it was found that all those who had seen the mysterious light, including Ingham’s three mates, were drowned, while none of those saved saw the mysterious light. Mr. Ingham can give no solution of the extraordinary occurrence, but merely tells exactly what occurred.