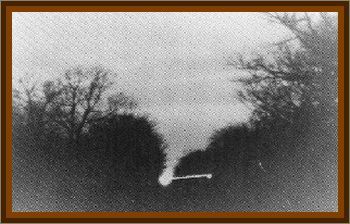 For over 30 years the local residents of Le Seur have told the story of a red light, that looks like a lantern, floating down the Omaha railroad tracks.

The area south of the town of Le Seur is know as Old Brewery Hill for the beer brewery that was located on the hill back in the late 1800's. When the brewery was built they also built two very deep caves into the hill to keep the beer cool while it was being aged. Eventually the brewery caught on fire and was destroyed. You can still see the remains of the cellars on the east side of Ottawa road on the right side of the hill.

While the old brewery has faded into the past, the folklore of a old hermit who lived and died in the brewery caves is said to still haunt the area along the railroad tracks.

Still to this day, the old hermit continues to haunt that stretch of train tracks near the old brewery hill, walking along the tracks carrying his red lantern and vanishing if anyone gets too close to him. Curiosity seekers explored the brewery caves had found some old clothes, a bed, and a shoe box and the remains of human bones.

Was this the remains of the old hermit? Did he die of natural causes or was he killed by a passing train or murdered in the caves? To this day no one knows who this hermit was.

The area south of town was known as Old Brewery Hill for the brewery that was started there around 1875 by George Kienzli. He constructed a small building on the hill and beneath it dug two deep cellars into the earth. Large wooden casks were brought in to store the beer while it aged and to hold ice that would keep the earthen chambers cool in the summer. The beer that was brewed there was hauled to nearby towns and it was fairly successful for a number of years. Eventually, it was sold twice more and closed down. The buildings later burned down but it is said that visitors along the east side of Ottawa road can still see the remains of the cellars if they can find the right side of the hill.

While the brewery is long since gone, the story of a ghost in the vicinity remains. It was believed that a man lived in one of the brewery caves and people claimed to see him leave the cave, walking along and carrying a red lantern. It was said that if you tried to approach him, he and the lantern would disappear. Curiosity seekers who explored the cave found some old clothes, a straw mattress, a shoe box.... and human bones.

Apparently, the hermit who lived in the cave had died long ago, but someone was seen leaving the place at night and walking along the railroad tracks! A brakeman aboard a passing train reported that one night, the train was forced to stop because of someone carrying a lantern along the tracks. When the brakeman got down from the train to removed the man from the path of the train, there was no one there. The engineer and several workers on the train all swore that they had seen a red lantern.

As time has passed the ghost of the old hermit still haunts the stretch of tracks near Old Brewery Hill, still waving his red lantern as he walks along and still vanishing if anyone gets too near. Why he haunts this place remains a mystery....