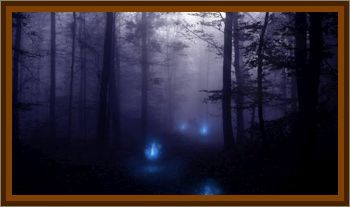 If you happen to be roaming the marshes and swamps of Bengal, You might witness a hair raising display of shimmering colorful lights in the distance. According to local beliefs, these lights emanate from the stranded spirits of dead fishermen who lost their lives accidentally in these areas.

Those who have tried to approach these ghost lights, or Aleya, have either lost their lives or their sanities.

It is said to resemble a flickering lamp, a light that will recede if approached. As per the legends, it draws or lures travelers from their safe paths into dangerous territories.

The swamps and marshes of Bengal have long been haunted by mysterious lights floating around in the darkness.

In Bengal, the associated folklore says that the lights are nothing but the spirits of dead fishermen, who lost their way in those swamps and eventually died.

In Bengal, it is said that whoever sees and follows those lights end up meeting their eminent doom. Some say that people don't really die when they follow the lights but they do become insane and never recover.

Several modern explanations have popped up about the Aleya Ghost Lights. Alan A Mills, a geologist from Great Britain said that these were precombustion halos often produced on some compounds are heated just below the ignition point. This precombustion halo is nothing but cold flame that has been found to occur in many hydrocarbons like waxes, acids, oils, methane, aldehydes and alcohol.