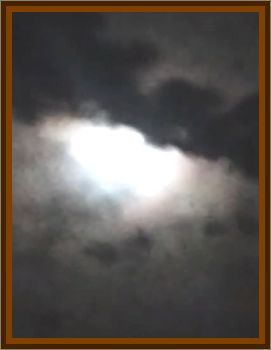 Last week, Wednesday October 8th, 2008 11:38 p.m., I saw something I can't explain. It had been drizzling on and off all day but not at the time of my sighting. The moon was obsured and it was overcast, with a few patches of night sky visible through the cloud cover, I couldn't see any stars.

I had my dog, a 7 year old Border collie named Oscar, out late on what used to be an old railway line, it's now a nature type walk that if I wanted to, could follow the 8 to 9 miles to the next town, Bishop Auckland. Usually Oscar trots off in front, sniffs about and waters lots of plants, but doesn't go too far off without waiting. Not this night. He unusually just walked along with me, even after a few attempts to tell him to go off and do what dogs do. About a quarter of a mile up the line, It's still called the line, from where it starts half a mile from my house. There's no lighting and it's pretty much away from any houses with street lighting. On my left are lots of thick bushes which had just opened out to scrub land and beyond that a fence which marks the bottom of the schools playing fields. On my right is scrub land then some farmer’s fields beyond that. From where I was, 650' ahead you enter some trees. The trees are about 40' apart, the path maybe 15' wide. The trees gradually converge later on down the path to cover the sky above.

Up ahead in the trees I could see a strong white light. Strong enough for me to be able to see the trees either side of the path lit up, and the path floor illuminated. At first I thought it was a car or something coming down the path, but then thought it couldn’t be as the local council has installed those gates every so often to stop hoodlums on motocross bikes killing people like me out walking the dog. Alternately it must have been someone with a very powerful light or something. It just didn't enter my mind it would be anything else. I carried on for another 200' or so, when the light started to move off to my right, and up.

That stopped me in my tracks. Once it had sort of cleared the top of the trees, I could see it a bit more clearly. It was 100% a structured object, the reason I say it was structured was I could clearly see its outline, kind of disk shaped, but not perfectly round, sort of elongated. I'd say roughly 50' long and 20' wide and 20' high. It was bathed in a kind of white diffused glow, but it wasn't like you could see its source. So hard to put into words. On the underside were two spots of blue light, one at each end of the longest length. It moved off to the right at a 90º angle to me, about 50' in the air, down into the large area of fields and stopped again. It just sat there 50' up in the air not making a bit of sound. Nothing, not a whisper the whole time.

By this time, I'm not kidding and don't mind admitting, I'm seriously spooked. All sorts of things running through my mind. What the hell is it? Is it me? Am I seeing things? It couldn't be just me, the dog was looking directly at it, stood right next to me, I mean right next to me pressed against my left leg. It then moved off away down the field, hard to judge speed, but I'd say no more than 20 mph, and down to a line of trees, I used to get conkers (nuts), in there when I was a nipper, where it stopped again, the blue lights underneath went out and then it shot off to my left at a 45º angle upwards and at a stupidly silly speed until it went from sight.

I stood opened mouthed for a moment, then checked my watch, thankfully I hadn't lost three hours, and nothing had been poking about my nether regions or stuck a rod up my nose. It was 12:42 a.m., 4 minutes had passed. I didn't have my camera and I didn't even have my cellphone.

So there you go, make of it what you will. Was I seeing things? ball lightning? a cloud? a silent helicopter? a plane?, swamp gas, exploding cow flatulence? a light house? (30 miles from the coast), a floating street lamp? Elvis in his light buggy? I have NO idea. insane. I do know a few things though, I'm not mad or insane, I don't drink, I don't take drugs, I don't have hallucinations (or flashbacks), and, I did see it. So did Oscar, and it wasn't in anyway normal.

I'm not sure of what to make of it. As expected, my family and friends have mostly laughed and joked about it, the usual stuff, I was tired and hallucinating, it was the moon, lightning or maybe they did take me away, and maybe they had done before and are the reason for losing most of hair at 21 (I'm now 37). I've spent pretty much 7 days on a wild internet jaunt looking at some strange things, but this site stood out as one of the best for not being sensational.

I'm not aware of any geological faults, that is, I've never heard anything mentioned. I've lived in Spennymoor for 32 years. Of course I could be wrong, it's just not something I've ever given any thought to.

UFO's have been one of those topics that I've of course read about in the past. I've always been open minded on the subject to be honest. Are they from elsewhere in this galaxy? Another galaxy? I've no idea. I do believe we, as an intelligent species, would be incredibly small minded to think our planet has the only life in the universe. Whether another intelligent species exists, and has advanced to the point of being able to transverse the vast distances involved in space travel? Again, I don't know, but I don't see it as being 100% impossible.