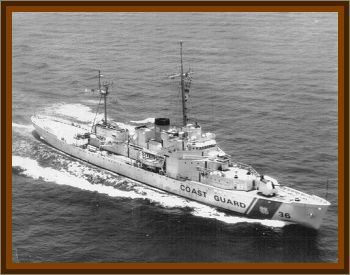 Location: At Sea In The Atlantic

I am restating what we experienced while aboard the Coast Guard Cutter Spencer WHEC-36, commissioned in 1936 and decommissioned in 1974. There is a new Spencer in service, but this is not the one I was aboard. My ship was a 327' cutter.

I have tried to the best of my ability to recall the date, but since we stood so many Ocean Stations, it is hard to remember on which of those this occurred. Corresponding with fellow crewman we did agree on May 22.

The conditions were warm, seas calm, and sighting occured at night. There were 140 mean men aboard the Spencer, and a large number of my fellow crewmen witnessed what I did. Officers and enlisted men saw what I saw.

I remember a friend had some state of the art photo equipment. I think it was an Olympus camera with telephoto lens. He was at least one of the crewmen photographing this UFO.

We were in the middile of the Atlantic, all running lights on as usual.

I remember someone saying come on deck, there's a UFO. It had bright lights that changed color. It was as if the UFO was checking us out. A ship with all its running lights on would be easily seen from above in any ocean.

I was in awe. I do remember some fellow crewman's names, put I can't put them here, without their knowledge or permissions. I can't be sure they were aboard for this duty, but I'm sure at least one was. I cannot remember the others.

The UFO would come down hovering above us. We could see what I would describe as portholes. It rotated as it hovered. The lights changed color. Then it would go up in a second, becoming very small. Then it seemed to show off, as if it knew we were watching it. It would accelerate across the sky in a split second while doing right angles.

Many photos of this craft were taken with a telephoto lens. I remember I couldn't wait to see the photos after they were developed. I never saw them. The show lasted about an hour.

Messages of this sighting were sent to Washington, D.C.

When we were relieved from Ocean Station Duty, we headed back to Governors Island, Yankee Pier in New York, that was our home port. We were not expecting the reception that we received. As we were docking, I saw quite a few Men in Black waiting to board our ship, at least they had the appearances of Men in Black.

Usually after docking, if you did not have duty, we were granted liberty of usually 72 hours. No one was allowed to leave the ship. We were all interrogated, one by one, by these Men in Black. We were told to sign an affidavit, stating we saw nothing. We were warned that if we mentioned this to anyone, we would be gone. We were told not to go to any news media and try and tell this story. If we did, we would be prosecuted by the govenment

I found out later that my friend, the guy with the camera, had all of his photo equipment, pictures, and developing equipment confiscated. He was not reimbursed for any of his expensive equipment; it was simply taken from him.