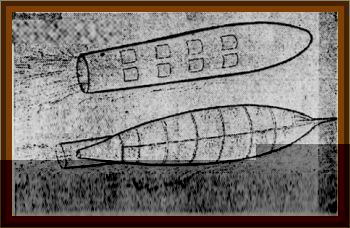 The flying saucers of the summer of 1947 may be far out stripped by the new crop of stories of a monster Speed Gordon type of skycraft, and of a moon sized disk.

The times of the sightings indicate that all three crews may have seen tbe same thing, said one of the pilots.

The first two pilots today stoutly maintained that what they saw was a man made gadget. They described it as a wingless affair with a circumference four times that of the fuselage of the Super Fortress.

They added: It was definitely jet propelled and had two rows of windows, each about the size of an ordinary house window.

When he leaves on his return flight tomorrow, Capt. C.S. Chiles, who first reported seeing the object, will carry a movie camera in tbe hope of getting absolute proof if the leviathan reappears.

In Los Angeles today, R.Dewitt Millet, author of Forgotten Mysteries, told United Press that the strange aircraft might have been a space ship from another planet.

He said: Our scientists inform us that we may soon build space rockets, so why shouldn't beings on some other world beat us to it?

A new mystery developed today, when two Civil Aeronautics Administration employees and a farmer reported having seen a silvery, moon sized object floating through the air over Washington just after noon, and again at 4:00 p.m.

It could not have been a weather balloon, because it was floating up wind. It was flying low and seemed to have flashing lights like a fog light, they said.

Later hundreds of people telephoned the Civil Aeronautics Administration offices reporting that they also had seen a moon sized blob wheeling across the sky above tbe city. A resident of Portland, OR, reported today that he saw a big, round, bright object going west. lt suddenly veered south west in an awful hurry. It bore no resemblance to an aircraft, and was roundish like a disk.