Disappearance Of The UK’s Most Spectacular UFO Photo 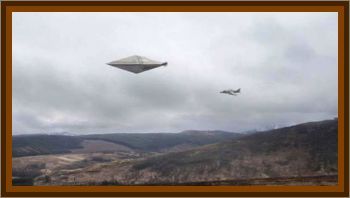 Hanging on the wall near the British government’s UFO Desk was what one of the men who occupied that desk called the most spectacular UFO photo ever sent to the Ministry of Defence (MoD). The photo has since disappeared, but the story of how the picture was obtained, and what it showed, has not.

Nick Pope ran the MoD’s UFO project from 1991 to 1994. When he was first assigned to the position, he was not excited about it. He felt the issue was ridiculous and he was not looking forward to having to deal with a bunch of UFO nuts. However, over the years, Pope found there were credible cases of incredible things, and began to see there was something truly mysterious about the phenomenon.

One of the cases that lead him to this conclusion had to do with a photo that was made into a poster that he found hung in the office near his desk when he began working the UFO desk.

I first came across this story in 1991, when I joined the UFO project, writes Pope. A poster sized enlargement of the best photo was prominently displayed on the office wall.

The X-Files first aired in the UK in 1994 and I acquired the same nickname - Spooky, as Fox Mulder, for obvious reasons, Nick continues. Mulder famously had his I want to believe UFO poster on his office wall, and though uncaptioned, I suppose this was my equivalent.

The photo showed a picture of a large diamond shaped craft with a jet in the background. When he asked about the photo, Pope was told that they had officially determined the image was real. They estimated the craft to have been over 80' in diameter.

However, if asked, they were instructed to answer: No definite conclusion had been reached regarding the large diamond shaped object.

Pope learned that the object had been photographed on August 4, 1990. Two people had been walking near the town of Calvine in Scotland when they spotted the large diamond shaped object. They described the object as looking metallic. It sat in one position, hovering silently for several minutes before taking off vertically at a massive speed.

During the sighting, the witnesses also saw a military aircraft that they thought might be a Harrier jet, but they were unsure whether the jet was escorting the craft, chasing it, or whether the jet pilot was even aware of the UFO.

The witnesses had taken several photographs and sent them to the Scottish Daily Record newspaper. The paper contacted the MoD, and the MoD was somehow able to convince the paper to hand over the photographs along with the negatives. The photos were then sent to the Defence Intelligence Staff (DIS) who then sent them on to imagery analysts at JARIC (Joint Air Reconnaissance Intelligence Centre). Yet at the time, MoD hadn’t even publicly acknowledged that there was any intelligence interest in UFOs at all, Pope explains.

We implied and sometimes stated that we didn’t investigate UFOs, but merely examined sightings to see if anything reported was of any defence interest, as if the two were somehow different!

Pope say the MoD was actually very interested in these cases, but often less interested in where the craft came from than what they could learn from it. They had hoped to identify some sort of technology they would be able to appropriate. Either way, the Calvine UFO photos impressed the UFO desk investigators enough that they hung the poster in the office.

At one particularly surreal briefing on the UFO phenomenon my DIS opposite number indicated the photo and pointed his finger to the right:

It’s not the Americans, he said, before pointing to the left and saying and it’s not the Russians. There was a pause, before he concluded, and that only leaves... – his voice trailed off and he didn’t complete the sentence, but his finger was pointing directly upwards, recalls Pope.

The office where the UFO desk was located also housed other non-UFO related projects.

Pope says the reaction of some colleagues who came to visit unaware of the UFO program had amusing reactions to the poster.

You’d have this surreal moment when they’d stop mid-sentence, stare at it, point and say what the hell’s that? – this wasn’t the archetypal distant, blurred UFO photo. This was up close and personal, reach out and you can touch it stuff. I don’t know what it is, but it’s not one of ours’ was our stock answer to the inevitable question.

Eventually, around 1994, Pope says his superior determined the craft was a secret American aircraft or drone. Pope says they had already asked the U.S. if the craft or something similar of theirs was being tested over the UK, and were told they were not. Pope believes his boss had decided to support a potential cover-up by the Americans and the MoD and removed the poster. It was never to be seen again.

Although Pope has discussed these photographs in the media and has posted an article on his website, no one has come forward to claim they took the photos. Nor has anyone at the Scottish Daily Record come forth to discuss any involvement. The case remains a mystery.