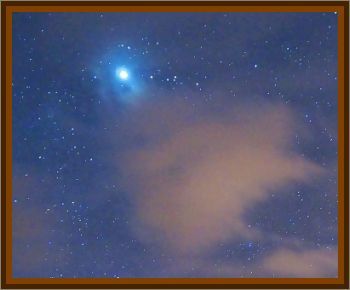 My dad worked for NASA during the 60's and 70's and we often looked up at the sky at night to look for satellites. The event took place one night as I looked at the sky. I guess I was about 10 years old, I was on our front porch by myself and I spotted a satellite or so I thought. It did not look any different from all the others I had seen, except for the fact that it changed course.

That did not happen. The speck of light I thought was a satellite went around the other speck of light. It made a perfect half circle around the planet or star and continued on its original path. My mother was near the door and I called for her to see it. She got to the door in time to see it finishing it's half circle.