It Was Taboo to Talk About Then 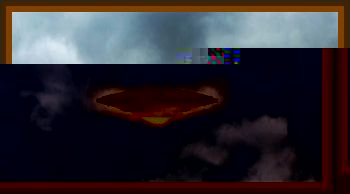 This happened in the late summer of 1963 or 1964. I do not remember the exact date, because I tried for a while to try to forget it. Things like I’m about to talk about were taboo in the home of a southern Baptist preacher at that time. It was best to keep your mouth shut and try to pretend it didn’t happen.

The following event took place in upstate SC. Within 30 miles of Spartanburg-Greenville airport. The reason I mention this is, the airport had very good radar at that time, and the Air Force Base at Sumter is less than then 15 minutes away for an interceptor. None showed up.

My brother, who is 2 years younger than me, and I usually sat out on the front porch each week night after school started back in late summer, and talked for an hour or so before we went to bed around 11:00 p.m. Our front porch faced about 10° to 20° northeast. There was a wooded area directly across the street in front of us, that had a lot of trees in it that were 50' or 60' high, so our view of the sky was limited down to about 1:00 a.m.

This night the moon was very bright and probably within a few days of being full, which made the porch dark where we were sitting. We heard a strange sound coming from across the street in the sky and out of our sight. It sounded like a multi engine aircraft that was straining real hard. We sat there and listened at it for a couple of minutes as the sound got closed and the noise changed to more of a whine, almost like a locomotive without the rail noise. In a minute or so we could see some lights through the trees and a huge shape moving slowly toward us.

My brother said it was one of those flying wings, speaking of some multi engine aircraft at that time that looked like wings. As it cleared the trees we realized it was a flying saucer and the sound had changed to a high pitched hum. We watched in awe as it came slowly over the road and over the house beside us on our left, or West side. It was very low and not moving much faster than a person can walk. We jumped up and jumped off the porch and walked beside the house watching it as it moved over that house and than just stopped and hovered over the back yard of that house. The hum changed to a hum like an electric motor, as I remember standing there in our back yard and staring up at the huge craft.

It was a round thick disk with 3 or 4 little blue lights on the side I could see. It had a big dome on top of the disk and it had a few amber lights around it about ⅓ of the way up. It looked to be about a 100' across the disk, and maybe 50' high.

It was about 500' up and maybe a 100' West of us. The reason I can describe the size so accurately is, I went back there several years ago and stood in the same place and looked the same way I did that night, and it was almost as if I was reliving that night. And I figured out the size and altitude then.

It was a dull gray color and the moon made it look very dark underneath. The odd thing was, the moon didn’t reflect off the dome in any way that I could see. The craft just sat there motionless, as we stood there looking it over. I wasn’t afraid of it at all, I was fascinated as I watched it. There was something about it that seemed to make a weird sensation in my body.

After what seemed an eternity, which in reality was probably around a minute, the sound changed to a high pitched hums and than it seemed to get out of the sounds that a human can hear.

The craft started to move up and back a little to the northwest at a very steep angle, slowly at first and that it left so fast that it was gone in about 2 seconds.

I remember as it was going out of sight I saw a red light blink somewhere on it. I can remember the feelings that I had as it disappeared.

I felt as if I’d just lost my best friend. I was excited, but I had a empty feeling. Now the weird part is, my brother and I have talked this over several times during our lives, and we remember the same things until the craft stopped. His version is quite different than mine up until it started to leave.

Well anyhow, that changed my life. I knew that everything that I’d been taught in church and history was wrong. Whenever I mentioned the damn thing to one of my friends, they thought I was crazy. So I quit talking about it.

My brother and I didn’t even talk about it, That experience did something to me, I have thought about it daily all my life. It has caused me a lot of problems. I’m going to cut here as I don’t think the rest of this testimony has any information on the craft.