Spacemen On The Ground 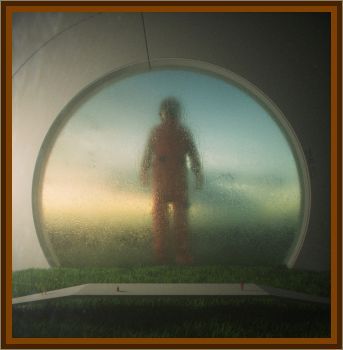 In 1949 I was seven years old. My sister and a girl friend were both seventeen years old and we were walking to school together in Moody, Texas, on a snowy morning, possibly in December. It was around 7:30 a.m.

The street was lined with mostly old two story homes and an empty lot where a house once stood was where we witnessed a saucer shaped spacecraft and three small individuals. We did not see the craft land but witnessed its departure.

The area was covered in several inches of snow but under the silver craft there was no snow and the ground appeared to be dry and at the edge of the melted snow under the craft, the weeds were slightly scorched. We stood possibly 30' from the craft when we came upon it, and there was a circular pedestal that the craft appeared to be supported upon. This pedestal was also silver in color and approximately 4' to 5'tall, maybe 3' in diameter and the craft was around 30' to 40' wide and saucer shaped. The craft may have been 12' to 14' tall in the center with what appeared to be a second level due to the smaller saucer shape on the top of the craft. There were no windows visible and no lights are remembered. The craft was slick with mo rivets or seams and slightly dull in appearance. There were some kind of faded blackish symbols that appeared to be present on the craft, but not anything we could read. My height at the time was around 3½' tall and I base these measurements in relation to my height. There was no sound as the craft was sitting there.

When we first saw the craft, there was a slanted silver colored ramp under it, and at the bottom of the ramp there was what appeared to be a human like figure standing motionless, staring intently toward us. The ramp was only visible from the side. Within a minute or so, two other identical figures appeared on the ramp and they smoothly descended to the ground without moving their legs. The ramp appeared to be a conveyor belt of some kind. The two who appeared together walked nearly out from beneath the craft toward the three of us, then stopped about 10' away. They were all about my height, were thin and while their heads appeared to be enlarged, they were enlarged only slightly but appeared elongated in the back. They had large black shiny eyes, nearly twice the size of a human’s eyes that almost appeared Asian. They did not blink as I recall. I cannot remember any ears or mouths but there was a small nearly triangle nose like protuberance present without nasal openings and a small narrow, elongated chin. I cannot remember for certain but I do recall there seemed to be something different about their hands and I think there were only four fingers on each hand. These human like figures appeared to be covered in a light green tight felt like material and except for shadow like temporary creases, there were no separate uniform type seams flaps, pockets or belts. No additional body parts were visible. Their faces and hands were identical to the clothing in color. Sexual organs were not observed. They appeared identical to each other. Of the two who approached the three of us, one nodded at us as he moved his head, apparently to observe the surrounding landscape. After possibly 4 to 5 minutes of looking around the two returned to the ramp and, floated up and inside the craft. After they were inside, the original being turned and also floated up into the craft. None of then uttered a sound audible to us. Once they were inside I particularly remember the ramp rapidly moving silently up and the closure did not leave a ridge or any indication of its presence on the bottom of the craft once inside, and in seconds, the craft emitted a low pitch, barely audible sound that may have been in conjunction with a slight vibration in the air that we all felt more than we heard, and the cylinder the craft had been resting on silently raised rapidly up into the craft and the craft immediately raised straight upward to just a little higher than the two story dwelling on an adjacent property, then hesitating for a few additional seconds suspended in the air motionless, it swung sideways and upward. In less than a few seconds it flew completely out of sight. The spacecraft did not rotate.

None of us felt afraid or threatened while this event was happening. We just stood there, silently watching and to this day, I cannot conceive of why we were so complacent about what was happening right before our eyes. As soon as the craft had completely disappeared my sister and her pal were terrified and started screaming, crying and we ran to my father’s business which was about four blocks away.

My father was a pharmacist and he was also the Fire Chief of the City Volunteer Fire Department. Upon hearing of this incident from my sister and her friend, he alerted the police and the volunteer fire department and several men quickly gathered at the site. While the firemen were inspecting the circular area that was under the craft, they were amazed that all the ice and snow was absent and the grasses appeared scorched. I cannot remember the time element, but shortly after the fire alarm was sounded and the firemen assembled at the location, the State authorities, police, etc., and a rather large assemblage of U.S. Army soldiers arrived. The U.S. Army quickly roped off the area and no one was allowed to be on the property. At some point that day a military officer reported to my father and gave him a clipboard with forms and a Geiger counter and requested that he take frequent radiation readings at the site and write them down on the forms he received from the Officer. My dad complied.

I cannot remember how long the site was under investigation. The area however was and still remains within few miles of a WWII military ammunitions manufacturing site and today I understand this site remains functioning as some kind of nuclear research or production facility and is off limits to civilians.

After the officer visited my father, my sister and I were told to never mention this event to anyone. We were also forbidden to discuss the event at home. Whether my sister’s friend was also informed to keep this event a secret from anyone, I do not know.

A few months after this event my family moved to another city in Texas. While the U.S. Army did retrieve the forms my father had filled out with radiation readings, he was told to.

I have tried to present this narrative unembellished and to the best of my memory as is possible. I can certainly assure you, this event was deeply imprinted upon my mind. In recent years before the passing of my sister and father, we discussed this event only one single time, and together we maintained the exact identical recollection after many years of being silent. Some things you simply cannot forget.