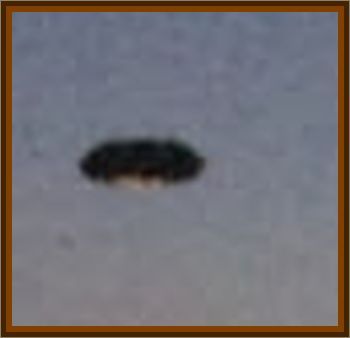 It was the first summer following World War II, in July,1946, when my husband and I were having lunch, as we sat outdoors beside our home, facing NE, on a cliff overlooking the shipping channel, less than a mile north directly up the coastline from the landmark lighthouse called Portland Head Light, ME, on the Atlantic Ocean, Portland Head Light is technically geographically located in Cape Elizabeth, ME, about 3 miles outside of the City of Portland, ME.

I felt the pull of an energy upon me, and felt as if I were being observed. In response to that energy pull and the definite feeling that I was being watched, I looked up at the clear blue summer sky high over the ocean water beyond, there I saw an unknown object in the sky, it was dark, long oval shape, motionless when I spotted it, which, the instant I focused back at it, as it seemed to be observing me, the object accelerated so fast straight upward so fast that I never was able to hold it in my vision to return its gaze, and then it seemed to disappear.

I felt at the time, and still do now, that this was a flying saucer, a UFO, and have never forgotten the incident, though I had no official to whom to report it.