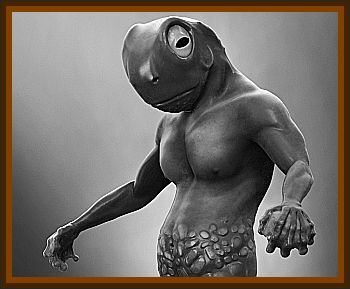 I don’t wish to give my name. I was a teacher in South Australia for many years.

In 1976 I was hoovering my sitting room floor at about noon. Suddenly I felt quite ill and thought I was going to be sick, so I sat down on the sofa to see if the sick feeling would subside.

I then saw that I was not alone, there were 3 strange little people standing alongside the sofa, just looking at me.

I froze with fear, as I had never seen anything like them before, not even in films.

2 of them were short and fat, about 4' to 4½' tall, with broad faces and enormous black eyes, but with only a hint of where a nose or mouth might have been, almost like a pencil drawing. They had wispy bits of brown hair at the back of their heads, and they were wearing brown shrouds or robes.

These beings, I knew instinctively, were the workers. The other being was female, thin and about 5' tall. She wore a black shroud and had black wispy hair at the back of her head. Her face was very elongated, with huge, dark, piercing eyes.

Like the others, there was just a hint of where a nose or mouth could have been. The thin one started to speak to me with her mind, and told me I was to go with them. I said in my own mind that I would not go.

Somehow this telepathic communication seemed perfectly normal at the time and I felt quite comfortable communicating like that. I was very frightened but I could still communicate and understand. I was so frightened because it seemed they were pulling me away with their minds. I had to struggle to resist them.

At one point I remember falling down and trying to crawl towards the door. I must have fainted or something because I have no memory from that point onwards. When my husband came home at the usual time I realized I had lost about 4 hours.

I still have no explanation for this experience.