Radar Tracked 35 UFOs At Once 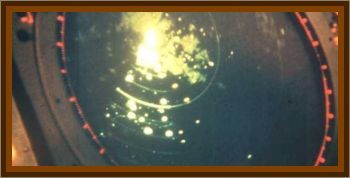 An RAF expert revealed how he tracked a whole fleet of spaceships on military radar, but the Ministry of Defense told him to keep quiet.

Wing Commander Alan Turner, said colleagues sat stunned when 35 super fast vessels appeared on their screens. Turner, who was a chief operator of the RAFs radar system for 29 years, said the craft were equally spaced and shot from 3,000' to 60,000' at almost 300 mph. Incredibly, every few seconds one of the UFOs would suddenly vanish from radar and be replaced by an identical vessel moments later. Turner said 6 military radars, plus operators at Heathrow, spotted the UFOs east of Salisbury Plain and filed reports on the unexplained phenomenon. The RAF chief even drew a map charting their flight in between key sites like RAF Lyneham, Wilts, & the aircraft navigation transmitter at Brookmans Park, Herts. 3 days later, the Ministry of Defense visited the RAF and instructed staff to never speak about the incident again.

UFOs are a fact, I tracked them on military radar units. What I saw defied all logic and was, quite frankly, extraordinary. It wasn't just me, More than 30 pairs of eyes of RAF staff and radar operators at Heathrow Airport witnessed the same thing. It's arrogant to believe that we're the only ones in this universe. I instantly knew this wasn't a flight of military planes. The only craft with that rate of climb were supersonic lightning aircraft but they wouldn't have been able to hold such a perfect formation. They also make a lot of noise. No one heard a thing on the night in question.