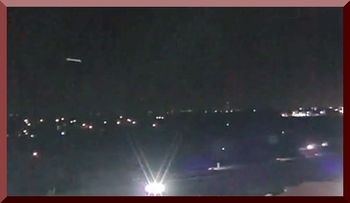 In October 1989, Oklahoma experienced its second largest number of reported UFO sightings or “flap,” since the summer of 1965.

The 1989 sightings were not quite the magnitude of those witnessed in 1965. However, it can be argued that, by then, there was more media to cover the same story.

Another reason may have been that, during this time, there seemed to be a worldwide flap of UFO sightings.

About two weeks before the Sooner State sighting began, Tass, the official Soviet news agency, announced that scientist had confirmed that an alien spaceship, piloted by giant people with tiny heads, had landed in Voronezh, a city 300 miles from Moscow.

This amazing event allegedly occurred on September 27, and was reported in The Daily Oklahoman, on October 11.

Also, appearing in the same issue was an Associated Press story from Miami, Oklahoma, under the heading of, Baffling Lights Sighted.

We had received a call about 8:30 p.m. of a UFO around the Brunswick plant, and we thought it was a joke. But when officers arrived on the scene they saw what looked like lights that seemed to move in different directions.

Baine described the spectacle as four lights in a cluster, led by a fifth light a short distance ahead. The police dispatcher said that the lights were first reported in Miami, OK, and were moving north.

This was supported by a Cherokee County, Kansas, dispatcher who received several reports of mysterious, rotating lights in the night sky.

The Daily Oklahoman quoted Larry Ruthi of the National Weather Service, as saying:

A check of area reporting stations indicated no unusual atmospheric conditions that might explain the sightings. He continued, An auroral display should have been visible over a larger area than just Miami. Frankly, I’m at a loss as to what they’re seeing.

Fred Beeler, also of the National Weather Service agreed, stating that he knew of no meteorological explanation for the sightings.

Wayne Wyrick, director and staff astronomer of the Kirkpatrick Planetarium in Oklahoma City, was quoted as saying:

A magnetic storm was sparking an unusually large auroral display in the far north.

He doubted the storm was the cause of the lights, but added that he, wouldn’t rule it out completely.

The Daily Oklahoman ran a series of articles updating the story until October 14.

However, local papers were not the only news organizations to take notice of the mysterious lights in the night sky over Ottawa County.

Headline News, broadcast a report encompassing the current worldwide UFO flap. Included in the piece were the Ottawa lights that had been videotaped by a local resident. Although the phenomenon was described as five colored lights, the video tape showed them fused together as one.

According to one of the witnesses interviewed:

North of our house, we saw a craft of some type. It was triangular in shape. It had three white lights and a red one in the middle.

Chief Baine not only retold his story for Hardcopy, but was also featured in the recreation of the night he, his assistant chief, a Miami police officer and even the mayor, responded to a flood of UFO reports to the police dispatch.

Also featured in the story was footage of the lights, compliments of KSNF TV.

Regardless of what the lights may have been, they were seen by hundreds of witnesses. Ottawa County played host to nightly star watching parties the week of the sightings. Television and newspaper reporters traveled to the area to see for themselves and to ask questions of local law enforcement officers and other witnesses.

During the evening, the Civil Defense command post received 12 phone calls about mysterious lights in the night sky. The Civil Defense director called the effort inconclusive.

In an unrelated case 11 years earlier, a similar phenomenon was witnessed approximately 80 miles southwest of Miami.

According to the July 1978 issue of the International UFO Reporter, two 24 year old witnesses were stargazing with a telescope five miles east of Tulsa, where they reported seeing 4 grey white ovals in a fixed formation pass silently in a straight line to the northeast, which is towards Miami.

Each oval appeared to be about the size of the moon, and flew at a 45° angle to the direction of travel. The ovals reportedly moved in a sword like formation, with one in the lead and three following.

This closely resembled the Miami lights which were described as one light leading and 4 following.

No other sightings were reported to the local police, and nearby Tulsa International Airport reported nothing.

Although the publication referred to this as a case of limited merit, it is an interesting coincidence.

The Ottawa County flap of 1989 lasted less than one week.

By Monday of the following week, either the lights, or the interest in the phenomenon had gone away. However, their origin is still a mystery. Adding to the mystery, is that Ottawa County is home to some of the state’s elusive spook lights, often described as low flying, nocturnal balls of light which seem to dance above the horizon.

Possible explanations have included planets, meteors, reflections cause by atmospheric conditions, or even pranks by youngsters using kites or balloons, these events did take place two weeks before Halloween.

Most people who have seen the mysterious lights over Ottawa discount those explanations.

No one is quite sure what people were seeing that week in October, which is why critics claim that it must have been a hoax. If that were the case, it successfully took in hundreds of local residents and newspaper reporters, as well as the Associated Press, CNN, and Hardcopy.

Does that mean that we’re dealing with aliens from another world? Since a similar sighting was reported approximately 11 years earlier, it would seem that at the very least, we are dealing with something unknown and very strange.

It’s arrogant for anyone to believe there is nothing new left in the world to discover. To quote the late, English astronomer, Sir Arthur Eddington, 1882-1944,