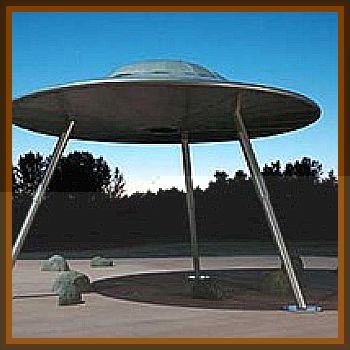 Back in 1983 or 1984 I was living with my boyfriend of several years, Andy, in a rather remote area, an old logging camp with about 8 residences, just 10 miles northwest of Sooke, Vancouver Island.

One mid summers night around dusk as I was out back with garden chores I could hear an almost indiscernible low hum, I could feel the sound more then hear it. I went to fetch Andy from the house to see if he could hear it, commenting on what a strange sound it was. We decided to investigate together. As we had lived there for several years we were quite familiar with the area, which was about ½ mile from the ocean, past our logging camp, that would be gated off during forest fire season, there were many connecting back roads consisting of crown lands and logging lots most of which date back 40 years. Not far back in from the gate was a 40' sand dune with small bushes on top and just past that was an old logging landing, consisting of a large gravel area several hundred feet wide and long.

We actually approached the site through our backyard, through a trail that came upon a small gravel road that ran adjacent to the gated road. The sound increased as we traveled in the near dark, we were very quiet. As we approached the cross roads we could see lights coming from ahead where we know the flat landing site to be, we decided to head up the back of the sand dune where we could get a good view unnoticed.

On tummies we crept and peered over the top. I was astounded by what I viewed.

And here it is. What I saw was an enormous dark structure, almost filled up the whole site that was a few hundred feet wide, to me it looked like the size of a football stadium, it was long, thin, rounded edges, lights placed strategically along the top edge casting shallow light downward.

I was shocked to see nobody around, not a soul, not a recognisable vehicle anywhere.

The sound was still louder but so strange I’ve never heard anything like it before or since, so low, you could feel it in the ground. I became a little scared at this point but could not peel my very wide eyes away for a second. All the time confirming to each other what we were seeing in very hushed tones. And my heart jumps at just recalling it, one of the lights beamed on us so quick and with blinding intensity that we both jumped back from it in startled surprise, then we ducked just as quickly and ran home the short way. If we didn’t have that sand dune to hide upon that light would have blinded one real fast.

The next day early we decided to check that out again, to my utter disbelief at 6:00 a.m. the following morning there was no sign of what we had seen. My mind was totally blown when around us was not a tire mark or footprint or any marks from the massive legs that held up this structure, and yet as we walked around we were leaving footprints. I asked the neighbors later if they heard that strange low hum, one neighbor, Art Shore, an old resident of the logging camp told me oh those are military operations they perform sometimes.

That might have made sense if one could have seen a convoy of trucks, like I’d seen before and people on the site, but in view of it now, nothing was ever explained adequately. I never reported to anyone else. As you might have guessed it had a huge impact on me as even after 20 years it’s as fresh a memory as it was the morning following.

I have had a few other strange unexplained happenings in my life before and I guess I just chalked it up to here we go again.

Woman, mother, wife, full time employed in labor, artist, writer, college graduate. I wish to remain anonymous and have not informed the other party of this report.

I could probably draw a pretty accurate drawing of it, most people would describe it as cigar shaped. I don’t know what it was but I’m not convinced at all that it had anything to do with our military, I know we have nothing as advanced as what we saw, and no people on the site, right.

I wished I could have stayed up all that night to watch the skies, but I didn’t, never saw it in flight but there’s no other explanation to me as how it got there and left so quick, with out any visible marks, other then to have flown in?