Abducted, Then Returned, While Sleeping 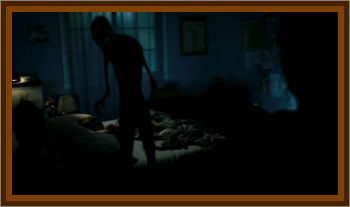 Jane Doe, We have changed her name to protect her identity, says in her own words:

I couldn’t sleep the night it happened the first time, I felt restless. So I go up to check the kids and stretch my legs. That’s when I saw a bright light in the back of the neighboring field. I watched as it got closer, seeming to just moss the trees. I felt as though it was watching me and remember clearly thinking that, but for some reason it didn’t bother me.

Jane continues: I turned to see if there were any lights behind me in the room to see if some reflection could be coming from that way, although I was in a totally dark room. There were no lights, no reflections. When I turned back around, the light was very close to my house and I could see it clearly as I watched it from the third floor window. It seemed to hover about 15' off the ground. Strangely I didn’t feel scared.

During the interview she recalled that the object was oval shaped and elongated and was approximately the length of 15 cars put end to end. It was very bright and it had an orangish white color to it. Strangely enough she did not recall the UFO event until she was talking about her abduction experience a couple of days later to her Aunt on the telephone.

She recalls that a few days previous to the UFO encounter she had witnessed a black helicopter hovering over the adjacent field to her house. The same field where the UFO was spotted.

They were hovering at an even height with my house and looking into my third story living room.

She described the occupants as wearing dark suits but what was most bizzare was the intense way that they stared at her through her window. In our opinion this has the hallmark of a classic MIB, Men in Black, encounter. Later, during the night after the UFO encounter Jane Doe was lying in bed, still unable to sleep when her youngest daughter came in to her room and complained that something was pulling at her leg. Jane told her daughter that it was perhaps the cat playing with her leg and told her to go back and snuggle up with her older sister.

It was shortly after that incident whilst still awake that Jane suddenly recalled finding herself lying on her back on something flat in a different place than her room. Her older daughter was kneeling beside her pushing the hair out of Jane face. She recalls her daughter saying:

It’s your turn now mum, don’t be scared, they wont hurt you.

Jane then felt herself being pulled by her heel as if down a tunnel and then found herself in yet another room which was criss crossed with greenish yellow laser like holographic grid lines suspended in the air. She felt like she was floating and also felt like something was poking or prodding her. She described to us as hearing a strange rhythmic sound which was similar to techno music but more machine like.

She was subjected to several medical procedures and at times felt terrified. But each time she felt this fear Jane says:

Something covered my brain and reassured me and calmed me down by indicating or was telepathically told don’t be scared.

Jane, who has suffered from back problems for several years, was very anxious that her conically bad back was going to be injured as her body was manipulated and her legs were being moved. She says that she was told that her back would not be hurt. Jane Doe says that she was aware of a holographic screen of some sort where she was able to see some of the medical procedures being done. Towards the end of the experience she recalls seeing a very tall creature and because her son is so tall she thought it could be him, but was unsure as to why she would see him, or if it was really him.

Under hypnosis she was able to see more clearly the creature and described the figure as being tall, skinny with long arms and legs. It had a big head with large round eyes which were dark but appeared to be similar to humans. Strangely the torso and legs didn’t appear to go together but rather meshed together as though it had no waist.

At this point near the end of her experience, Jane Doe feels as though there was some urgency for the procedures to end and everything was done quite quickly from this point on, in a big rush.

There are some very personal details of this experience that Jane has requested that we leave out. Suffice it to say that they were not pleasant.

It just seemed as though I was back in my room on my own bed with my husband beside me. It felt like I had left and returned. I was fully aware of what was going on and lying in a different position than when I had been taken, without any clothes on.

On the fourth night after the initial encounter Jane’s anxiety had built to sheer terror. She didn’t know how to cope with the fear so her husband, who was becoming more and more concerned about her distress and to assure Jane that she wasn’t being taken, set up a CCTV camera in their bedroom to relieve her fears. Nothing happened the first night but on the second night, just 6 days after her first experience, Jane was taken again but this time it was as she slept.

In the morning she recalled the events of being taken and told her husband who showed her how to view the CCTV footage as he needed to go to work. He believed that the footage would show nothing more than them sleeping which would reassure her. However, to her dismay, as she checked through the footage, she saw something that would change her life forever.

I was watching it and then it came to a part where I seemed to have disappeared.

My husband was at work and my daughters were at home as well as my son. I started to yell because I didn’t know what else to do. It completely shocked me.

Both Jane’s oldest daughter and son, who is by nature skeptical watched the video in shock, although at first her daughter laughed and asked her how she made herself disappear. But when told it was from the camera footage, she was astonished.

I called my husband, totally freaked out by now and he came home right away. He also watched it in shock. We operated somewhat in Zombie mode for weeks afterwards. My son, my husband and myself stayed awake until early morning every night and then tried to cope throughout the day with little or no sleep, Jane Stated.

If you watch the footage, it appears to show Jane and her husband soundly asleep in their bed. But suddenly Jane Doe seems to melt into the mattress and totally dissappear. Nothing happenes on the footage for another 13 minutes, the video you watched was fast forwarded to save time, until she appears to materialize back into the bed and pulls the sheet over herself. Her husband turns over and they return to sleep.