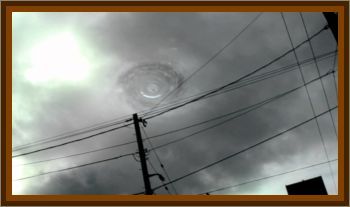 I am a retired Detective with 25 years as a peace officer. With me was a marketing director for a national company and my 17 year old son. We live on a large ranch.

It was 9:30 p.m. when I entered the inside of our home. As I looked out our kitchen window, I noticed extremely bright bluish lights which upon further observation were actually portholes that were illuminated from within.

There were three on the bottom in a row, one above, right/center, above that one was another single illuminated porthole left center and then two on the top.

The object was approximately 300' to 400' from where I was watching it.

I thought initially that someone was in my field illegally with a truck and trailer. As I watched, I noticed that it was apparently hovering and made no noise. I immediately concluded that it was not a motor vehicle of any kind and noted that it made no noise whatsoever. As I was watching it, my friend came running out to the back deck asking what it was and then my son came, asking what the bright lights were.

We spent approximately 5 full minutes trying to figure out what it was.

Totally perplexed, I got my flashlight, gun and we all got into my truck, which was parked in front of my house.

We drove around the house and noticed that the object was just gone. We drove to the exact location in which there are many trees that are part of our nursery. They are approximately 15' to 20' tall. At no time did we see anything fly away, flash of light or anything. It was just gone.

Had it been a motor vehicle of any kind, there would have been tracks, dust,etc. Additionally, my ranch is fenced in with one way in/out.

I got out of my truck and approached the landing/hovering site to look and obtain physical evidence.

The area in which the craft was located consisted of soft, thick dust that had just been sprayed with water several hours earlier. I found absolutely no physical evidence whatsoever.

There is debate within the three of us if the craft was in fact hovering or had actually landed.

The brilliance of the light in which the craft produced was unearthly, and like nothing I have ever witnessed in my life. I had/have no logical explanation for what had happened and this incident defied the laws of physics.

No sound, no contrail, no disturbed soil, no bent trees, nothing.

We drove back to the house. Extremely bothered by what we had just witnessed, my son and I returned to the area approximately 20 minutes later. I was not afraid but intrigued by what had occurred. I turned off my truck, noting it was a beautiful moonlight night, and the moon was extremely bright. As we were reexamining the area, we both hear a loud bizarre click noise off to our right in the area of green houses. We looked into the nearest green house when we heard another distinct loud click, this time coming from a thicket of trees. As we approached this area, we heard another distinct click noise coming from behind us in another thicket of trees. We heard a total of 5 distinct loud click noises.

In all honesty, the clicking noises were coming from all around us and after the fifth one, it was a little eerie, even though we could see nothing with our flashlights, and I instructed my son to return to my truck and we left. The most unexplainable part of this story is as follows:

My brother came over to my ranch approximately an hour later, 10:30 p.m., He has a doctorate degree, three master degrees and works for a international company. Additionally, he has taught physics. We are both skeptics and believe that most UFO sightings can be logically explained. When I told him of what had just occurred earlier, he suggested that we go back down to the location and figure out what it was that we saw. As we were at the location, which was approximately an hour and a half later, we both witnessed an extremely bright swish in the western sky. It was probably a half second. But what we saw appeared as if the atmosphere opened up for a millisecond and an object went inside or poked through and then the atmosphere closed up leaving a swirling motion in the sky. A wormhole or portal. It terrified him so bad that his eyes watered and his voice cracked, insisting that we immediately leave towards the house. He cannot believe what he saw and both of us have had several sleepless nights. We can verify and confirm our credentials. WE have absolutely no idea of what we saw and my brother, as educated as he is, can not give a logical explanation of what we saw and I think this is why we both are so disturbed by the incident. We cannot report it in fear of ridicule and do not want to utilize our names. We both are heavily connected at the local/state/federal political level.