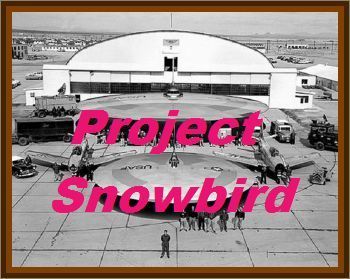 Project Snowbird is the project that has to do with test flights with alien crafts. (Stealth, Aurora). As such it is a subproject of Project Aquarius/Moondust.

According to M.W. Cooper, Snowbird is not the actual project to testfly alien crafts, but was established, instead, as a cover for project REDLIGHT. Several flying saucer type craft were built using conventional technology. They were unveiled to the press and flown in front of the press.

The purpose was to explain accidental sightings or disclosure of REDLIGHT as having been the SNOWBIRD craft. (MW C)