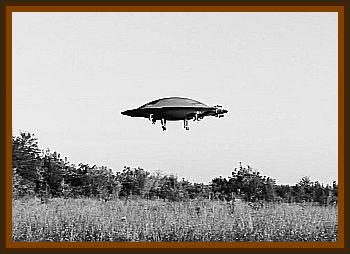 When a UFO passes within a few feet of the truck cab, the Air Force calls it a lost missile.

I have noticed that much of Idaho’s UFO history from before 1970 is totally missing now unless you happen to own a copy of the book:

I cannot find my issue, if I even still have it, but I know one of the entries from personal experience.

During the summer of 1957 my Dad and my Uncle Paul worked together in a post and pole business located one mile west of Donnelly. In midAugust of that summer they had an order to fill 100 miles south near Nampa.

The flatbed truck was loaded and they left early one August morning. When they returned late that night both were filled with an incredible story.

When returning from the Nampa/Boise area they took the only route available which was Idaho State Route 15.

Years later the road would be widened and made a bit straighter and renamed SR 55.

Uncle Paul was driving and my Dad was the passenger. Traveling north the trip was uneventful until the moment they turned onto Rainbow Bridge just north of Smiths’ Ferry. By the time they reached this area it was twilight or past 9:00 p.m..

Also, there was no other traffic on the highway at the time.

This area is also known as the Cougar Mountain area. At least once a decade, when traveling through the same area, I would ask my Dad to tell the story and point to what he saw.

Most recently was in 2003, not too long before he passed away. The story never changed.

Both the road and the river become narrower with some zig zagging prior to reaching Rainbow Bridge. The road makes a sharp right onto the bridge. At that point my Dad yelled: STOP!, and the old flatbed truck was nearly in the middle of the bridge before coming to a complete stop.

What my Dad had seen was something large and glowing coming right up the river at about the same level above the water as the bridge. As they came to a stop the large object rose slightly to avoid the bridge and missed the cab of the truck by mere feet.

Once over the bridge it dipped about 30' down to the river then pulled up in a high arc reaching about 500' higher than they were, then dove straight down onto the top of a hill.

They watched a bit of an explosion, but did not notice any burning of the dense forest.

The land had not been logged and therefore no roads existed leading to the crash site at that time.

My Dad described the object as circular and shiny on top with a nearly flat bottom. The entire disk glowed with a bright purplish color and was traveling up the river and through its arc at about 60 mph. It was half the width of the bridge making it about 100' in diameter.

My Dad would seem to be a good person for observation. He was retired from the Air Force with the rank of Master Gunnery Sgt. He had been in the Flying Tigers and when evacuated from China he was sent to school for the Norden Bomb site and spent the rest of the war in the Flying Fortress.

He told stories of Foo Fighters and the first momentary glimpse of this disk coming up the river immediately triggered his old reaction to those earlier foo fighters.

Unable to do anything about the crash, the two men continued north for a half hour reaching Cascade, the county seat for Valley County. There they stopped at the police station and filed a report.

During the evening of the next day an Air Force Officer dropped by the house and explained to my Dad and Uncle that what they saw was no more than a missile that had been accidentally launched from a jet out of Mountain Home Air Force Base, southwest of Boise.

The officer added that:

You have no reason to be concerned and should just forget about the incident.

I remember looking at the smiling officer and then at my Dad just staring at him for a moment. My reaction was to try to melt in to the background and be out of site for a while.

Very calmly my Dad explained to the young smiling officer that he was retired Air Force, added a few details, and knew a missile when he saw one. He then invited the officer to change his story or leave.

That was the last we heard from the Air Force about that incident.