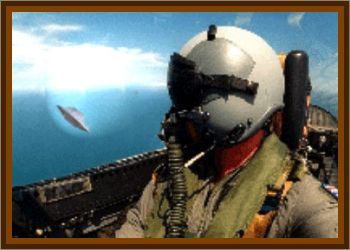 Radar identified an UFO object that had entered Polish airspace. Mr. Stanislaw Z. notified the proper officials and soon an alert was announced. In the following minutes Captain Praszczalek would have direct contact with the UFO.

Many military services maintain that they don't keep track of UFO sightings, but the Polish army keeps records of pilots that encounter UFOs. The following information was obtained from Mr. Marcin Wawrzak, an UFO enthusiast from Slupsk.

The report was related by Mr. Stanislaw Z. who was in charge of the radar operations at Slupsk Military Airport:

On July 6th 1983, I was on command duty as a navigator. We received information that some Unidentified Flying Object appeared over an airport in Darlowo.

A military jet was ordered to close on the object and to report. After several minutes, the pilot replied:

I can see the target. It is steel in color, rotating around its axis, throwing as a boomerang, without any exploratory marks, without any engines nor markings, stated Stanislaw Z.

Captain Praszczalek's description of the object puzzled those in command of the airport. It was decided to notify the General Command of Air Forces in Warsaw and let them decide what actions or procedures the pilot should follow.

In 20 minutes the decision came ordering the pilot to fire at the object.

When he passed on the command: Fire, to the pilot, the pilot reported that, The object made a sharp turn and disappeared.

Then suddenly, all the radar screens went crazy, registering thousands of unknown signals. For the next 10 hours military aircraft unsuccessfully searched for the unknown object.

The next day Military Special Service members arrived on the base and began their investigation of the incident. Their final report and any determinations made have never been made public. Stanislaw Z. refused to talk about the investigation.

During the past twenty or more years there have been many similar reports to the 1983 Slupsk UFO encounter.