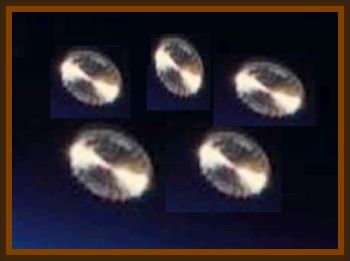 G.L. son of an newspaper editor, and my self were looking through his telescope at the close encounter of a comet.

His telescope was a complex refractor, had variable power, 4" light gathering power, had tracking ability, and could mount a 33mm camera.

He had won the regional High School Science with his rocket project. I had participated with my Coal Tar Project, and won honorable mention at the State Science Fair at BYU, the same time Dr. KT won the prize in physics.

After looking at the comet with binoculars and through his telescope and taking pictures, we saw 5 saucer shaped, silver objects flying from the direction of the Salt Lake, and flying towards the area of Kennecott's copper refinery.

The objects were small with the unaided eye, but were much more clear through binoculars, and his telescope. We focused the telescope with the telescope viewfinder. and brought them within view. Originally the objects moved slowely, to the site mentioned, and then stopped in flight and started hovering.

We could see through the instruments, that there were several distinct separate objects, and they were not the lights from one single craft. We looked for insignia to see if they were possibly U.S. Air Force vehicles, or Army helicopters. There shapes told us that they were unusual crafts. We brought it to the attention of GL's father, and he also looked at them also through the instruments. He stated that we should mount the camera on the telescope and take pictures of them.

The occurance took about 10 to 20 minutes in total. After the 5 saucers where hovering in a still position, which appeared to not spin, they started moving and spinning, and headed at an increasing speed, up over the Oquirah Mountains, in the direction of Tooele Ordinance/Deseret Chemical and Dugway Proving Ground, and disappeared out of sight. They didn't change color, and there was no trails, and no noticeable sound.

We discussed afterwards the event. When I went home, I told my parents also of the event. Dad said that I should report it, since there had been a number of UFO sightings in the area. I talked to GL over the phone about the matter. He said that his father told us to wait until the pictures are developed.

After the pictures were developed, we also had them enlarged. One could clearly see that there was some advanced technology, which we were not familar with. My friends dad, then said that since he was a newspaper editor, he had an obligation to first call Hill Air Force Base, because he didn't want to reveal any Government secrets to the public.

After calling them, an appointment was made for the Hill AFB Investigating Officers to come and talk to us. 3 officers, including an Air Force Major came to talk with us. After sitting down with us, discussing and recording the event. and looking at the pictures, they started making recommendations and requests.

We waited a few days, and an answer came. A call from Hill AFB's representative came, and he strongly advised us to forget the happening, otherwise action could take place.

The Editor questioned him, and the representative answered that he was advised by the Army CIC that severe penalties could take place if the word would get out.

I followed the advice, and didn't ever mention the incident until 1966 when I attended a UFO Conference in Denver, and also talked to Dr. E. U. Condon. GL eventually graduated from MIT, and I believe that he still has some secretely kept prints.