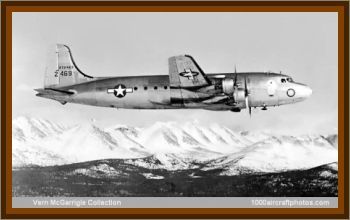 Flying, from Alaska to Texas, via Montana, with 44 souls on board, 8 crew members, and 36 passengers, including two civilians: a woman and her infant son. The aircraft, Douglas C-54 Skymaster serial number 42-72469, made its last radio contact two hours into its 8 hour flight, when the pilot reported that it was flying over Snag, a village in the Yukon of Canada, a long way inland. Despite one of the largest rescue efforts carried out by the US military, no trace of the aircraft has ever been found. It is considered one of the largest groups of American military personnel to ever go missing.

The aircraft was part of the First Strategic Support Squadron, Strategic Air Command. out of Biggs AFB, TX.

It had made an initial attempt to depart, but was delayed several hours after reporting trouble with one of its four engines. The aircraft was flying from Anchorage, Alaska to Great Falls, Montana; 2 hours after its eventual departure it reported it was on course and had just passed over Snag, Yukon. There were no further messages.

An hour after it failed to show up in Montana, Operation Mike, named for aircraft commander First Lt. Kyle L. McMichael, was launched, a search and rescue program combining as many as 85 American and Canadian planes, in addition to 7,000 personnel, searching 350,000 square miles of the Pacific Northwest. The search was aided by the fact soldiers and equipment had already been ferried north for the upcoming Exercise Sweetbriar, a joint Canada/US war games scenario. However continuance of the operation also confounded searchers, giving many false positive reports of smoke signals, garbled communications and sightings of survivors.

On January 30, a C-47, Air Force serial number 45-1015, from the 57th Fighter Wing that had been participating in the search, stalled and crashed in the McClintoc mountains, its crew members were injured, but there were no fatalities. Its pilot walked 8 miles to the Alaska Highway and flagged down a truck to call in support for his 5-8 crewmates. On February 7, a C-47D, 45-1037, from Eielson Air Force Base employed on the search by the 5010th Wing, crashed on a mountain slope south of Aisihik Lake. There were 10 crew on board however there were no fatalities. On February 16, a Royal Canadian Air Force C-47, KJ-936, crashed near Snag. Again, its four crew members sustained only light injuries. Later its wreckage would be temporarily mistaken for the missing C-54.

The operation was indefinitely suspended on February 14, as the search planes were needed to investigate the crash of a B-36 that had been carrying, and had dropped its Fat Man type nuclear weapon, though the core of the weapon was lead in this case.

On February 20, the search was officially cancelled and notifications were sent to next of kin informing them that the passengers were presumed dead.

Incidentally, there were two contemporary reports of unidentified flying objects by officers stationed at Elmendorf AFB, the first a week before the disappearance, and the second two days after the disappearance. On 19 April, Sgt. William Y. Harrell reported from the control tower that he had seen two UFOs hovering over a hangar emitting a green light, a report backed by other soldiers at the base. On 28 January, Lt. Col. Lester F. Mathison reported seeing 3 orange cigar shaped UFOs flying in tandem above the base. Both cases were investigated by the Alaskan Air Command, who ruled only that the objects were neither weather phenomena nor recognized aircraft. The latter incident has also been catalogued as happening on January 26, within hours of the C-54's last transmission.

In 2012, the descendants of the missing servicemen started a petition to the Federal government, through the We the People petition system, seeking to resurrect the search for their families' remains.