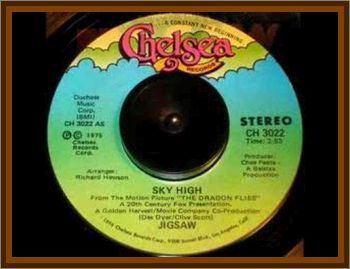 In the disco era, in August, 1975, a song was released under the title of Sky High. The recording artists were really just a group of studio musicians listed as Jigsaw. If you research the actual information concerning its production, as I did, you will find that this seemingly innocuous song has a very remarkable history. My personal discoveries led me to the conclusion that this song was recorded in the future and transmitted back through time and into the past.

My discovery of the true history of "Sky High" began in the early 1980's after I finished engineering school and returned to work at BJM, the made-up name I have given for my actual employer in the defense industry.

Because of my vast knowledge of electronics and my involvement in the mind control projects, I was essentially king of the hill at that point and could pretty much do what I wanted. The rest of the company had rather strict dress codes, but nobody ever bothered me about how I looked which was not necessarily neat and tidy. So, no one said anything when I brought in a big vacuum-tubed stereo receiver and connected it to speakers so that it played music all around the plant. We primarily listened to CBS FM who often played the song "Sky High. All of a sudden, in 1983, it quit.

There was no more Jigsaw; no more "Sky High. Quite a few of the employees liked the song, so we called up CBS and asked what happened. They told us the recording they had went to pieces and could no longer be played. They did not know where we, or themselves for that matter, could obtain a copy of the song, for purchase or otherwise. I put that information away in my head and eventually went to a record shop and ordered a copy of Jigsaw's "Sky High". It was a single 45.

I took it home and played it at the correct speed, being sure to use a good needle that was placed correctly on the record. What I heard was the most horrendous cacophony of noise you ever heard. I did not know what that noise was about, so I returned it to the store. They played it and noticed that something was wrong with the record. Consequently, they took it back and ordered another one. Two weeks later, I went back and discovered the new record had the same problem. The clerk said he was sorry, but he was not going to be able to get "Sky High" for me. That was that.

In around 1996, I was watching television when an ad came on for one of those Time-Life series of recordings. It was called "The Fabulous 70's" or something like that. The next thing I knew, I soon heard the song "Sky High" blaring out of the television speaker. I copied down the phone number and ordered the CD. Sure enough, I got the disk; and there it was, listed with all the other songs: "Sky High" by Jigsaw. After noticing that this CD was produced by Warner Brothers, I called up some contacts there from the old days and said that I wanted to find out the history of this particular song.

I was finally referred to their tape archivist. This was a lady who kindly informed me that when they went through the master tapes for the different series, they noted an irregularity on the sheet that listed their master tapes. Next to the words "Jigsaw, Sky High" was the word "noise." This verified and restated the problem I had encountered years earlier. Finally, and for some unknown reason, the recording was replayed and the song could actually be heard. It was eventually put on a CD and made available for purchase.

What happened here? It took some time to figure out what had happened, but between my research and additional recovered memories, I was able to put together a tangiblethesis.

The "noise" heard on the original master tape was indeed noise but was "white noise." In the book The Montauk Project, it was mentioned that white noise was the correlating function or "glue" which made everything stick together. White noise is basically a random group of impulses with different positions and different pulse widths which, when added to over a period of time, contains every frequency within the band width of 20 to 20,000 hertz. In other words, white noise represents practically every frequency that is out there. There are actually other frequencies outside of the 20 to 20,000 hertz range, and these are called "black noise," but we do not need to get overly concerned with the difference here. We are basically dealing with a panoply of frequencies.

So that you can better grasp the idea of white noise, take the mute off your FM radio and tune in between a couple of stations that come in clearly. You get a hiss. That is white noise and contains every frequency within the band width of 20 to 20,000 hertz, save for the fact that FM receivers are technically only 15 kilohertz wide so it really only picks up frequencies between 30 to 15,000 hertz. White noise basically covers the entire spectrum of frequencies. If you look at this hiss or white noise on a scope or spectrum analyzer, it looks like an infinite group of random pulses. It represents the cacophony of electrical transmissions that we know of as this universe.

The reason you get a clear signal when you tune in a given radio station is that there is a device called a "limiter" which knocks out the noise in all stages of the receiver. This is called frequency discrimination. It is sort of a filtering process from the incoming carrier signal. Actually, the noise is being overridden by the carrier wave generated from the transmitter. The noise is still there but it is way down in amplitude and you do not hear it to any significant degree. Only the desired signal comes through and that is what you hear on your radio.

As white noise contains virtually every potential transmission and every quantum potential, it is a very open ended proposition. Within it are ordinary transmissions but also etheric and esoteric ones. It literally represents the energy stream of the universe. This is very common information to me, but most people are ignorant of the common facts of electromagnetic waves and too many professionals do not have a clue as to their esoteric significance.

The noise on the record "Sky High" was caused as a result of a closed down time loop that occurred in 1983.

The Montauk Project was concerned about opening up a time loop between 1943 and 1983 as these two dates corresponded well to the Earth's forty-year biorhythm. This "forty-year biorhythm" can be compared to a meridian in the body through which life ebbs and flows in the stream of time. When this loop was opened up, it facilitated traveling to other points in time by the project operators. I eventually discovered that when the Montauk Project went down in 1983, the time loop between 1983 and 1943 closed. The "Sky High" recording was actually recorded in the future and was sent back into time. When the project closed down and the loop was broken, the song did not play anymore. All one heard was white noise which was actually the witness to the transmission of the song "Sky High."

The original studio master tape to "Sky High" was done at Montauk. One account indicates it was done around 1987 or 1988 where it was played and sent back in time to 1982. From 1982, it was transmitted through time back to 1972 when I was working at Bell Sound and recording something like disco. The song was actually very early disco. Another account, which I believe to be more accurate, has it being recorded in 1982.

When the hole in time closed, the recording disappeared. What was on the physical recording was basically white noise from the preamp to the tape deck because everything else was blocked out by the time transmission. The actual recording contained white witness that called the recording in through time. In other words, if you took that 45 before 1983 and placed it on your turn table and played it, the white noise on the 45 became a witness to the original transmission of "Sky High." A portal in space and time was opened as the machine played back the recording, making a connection back to Montauk in 1982 where the signal was being transmitted into the audio system. The time transmission preempted the recording on the audio system.

As the record was made in "real time" in the 1980's, it could be heard thereafter. The theory is that if it was played between the time the loop was closed and prior to the original recording, it manifested only as white noise. When I have told this story in public, I have demonstrated the "etheric" component of the recording of "Sky High" by playing it on a tailored boom box I have fixed up. If you put your hand over the speaker, it will vibrate in a manner that you will not feel or experience with almost any other song. Two exceptions are the songs "Shannon" and "Beach Baby," but these are also believed to be time transmission songs.

"Sky High" was what we call a "time mark" recording. Duncan Cameron, the time traveler from "The Montauk Project," recalled having sign posts in time placed around what he was involved in doing. The "Sky High" recording, whenever that was played and the connection was made, was a sign post placed in time. Time travel at Montauk was done by moving from post to post to post to post, through an open ended vortex. This use of music was part of the time travel project.

Interestingly, I heard that a phonograph record that went out on one of the Voyager missions had "Sky High" on it. If aliens play it in the future, there is a time mark for their civilization, their galaxy, and so on. The time marker would be placed in their time which would become a witness to the Montauk Project.