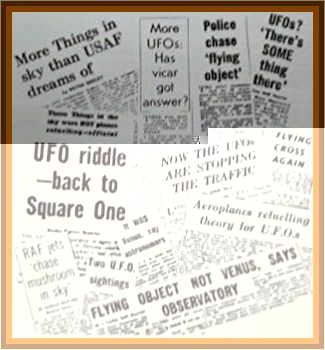 Commercial airline pilots report between 5 and 10 flying saucer sightings each night, it was learned today.

Representatives of major airlines will meet Wednesday in Los Angeles with Military Air Transport Service, MATS, intelligence officers to discuss speeding up saucer reporting procedures. The idea will be to get the reports in the quickest possible way, so that the Air Force can send fast jet fighters to investigate. Heretofore, commercial pilots have landed and then reported to MATS through their companies. By that time, the trail usually is cold. Now, pilots are instructed to flash reports direct from the air to MATS intelligence Washington or to the nearest Air Force base.

However, several bugs have been found in this plan. Some pilots, for example, don't know how to contact MATS intelligence. Others don't think it important enough. That's one angle to be discussed at the Los Angeles meeting.

Airline pilots are asked not to discuss their sightings publicly or give them to newspapers. Navy Capt. Bernard Baruch Jr., MATS intelligence officer, is in charge of the project. Captain Baruch's headquarters are in New York, but MATS intelligence also maintains a large staff at Andrews Air Force Base, Md., near Washington. One well informed source said that until recently the largest number of sightings were from the Southwest Pacific. Saucer sightings have been particularly numerous around Australia, where the British maintain a guided missile range.

Recently, however, there has been an increase in saucer sightings in the North Atlantic, this source said.

Simultaneously, the number of oil slicks and submarine sightings in this area has increased. However, some associate these sightings with the establishment of an Air Force B-36 base at Thule, Greenland. The same source said flying saucer sightings are fairly common throughout the non Communist world. They invariably are made at night. Frequently several independent sightings of the same saucer, are reported from different spots along a plane's route. Two reports made this week by commercial airline pilots were cited as typical.

In the first, a Colonial Airlines pilot, en route to Washington from Richmond, said he saw a saucer descend from the stratosphere, approach his ship, hesitate for a moment and then reverse its course. He said it appeared to re enter the stratosphere. The pilot was described as a man of mature judgment, a college graduate and an attorney as well as a pilot.

In the second, 2 Northwest Airlines pilots en route from Seattle to Anchorage reported a strange object with several portholes which exuded a blueish light, flew alongside their ship most of the journey, disappearing as they were about to land in Anchorage. The pilots tried several times to close the gap between their ship and the strange object, but could not. They said the object was definitely under someone's control.

They were questioned for two days in Alaska before going on to Tokyo.