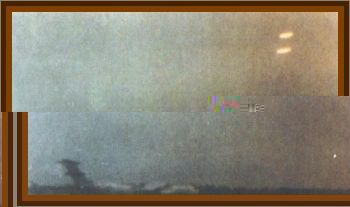 Jesper Andersen, 7 years old, came forward to claim that he was outside with another older boy, Tage Jensen, and his little sister of 4 years, and the they had decided to go back home as it became dark. But they noted something in the air straight in front of them, that they first believed to be a whirlwind, before realizing it was a solid dark grey object.

Tage Jensen became scared and ran home with his sister and told about what they saw to his mother. She looked outside from a window, but could not see anything. Jesper had stayed outside and observed the unknown object.

After a while and for safety’s sake, he hid himself, in such a place that he could actually see the object against the valley’s background.

He saw three legs that deployed at the bottom of the object, and it seemed to him that it was preparing to land. However, when it was only a couple of yards above the earth, the legs again retracted into the apparatus, and it started to move up to the sky. It then flew in straight level towards the shore of the Kattegat.

Jesper then saw something that resembled a basket being lowered down amid the object, attached to a cable thick like an arm, and from a hole in the craft, eight little beings jumped into that basket. These little beings were not taller than Jesper, and he could tell that they had long faces and long noses. Seven of them had fair and short hair and a stripped suit while the last one had dark brown hair and a blue suit. The eight of them wore a cap on the head. Jesper was also able to tell that the weird beings had some transparent containers at the back, like a diver’s package, with a hose that went from the pack to their mouths.

They had lights on their shoulders, and carried objects like binoculars or cameras. The object flew low above the shore and actually flew near to the boy at an angle, so that he managed to see the beings were smiling down at him. They apparently also waved their hands at the boy, but not the usual waving, since they held their palms vertically and agitated the arms horizontally.

Then, a faint humming noise was heard, compared to the sound of a battery tape recorder, the basket went up again and the weird apparatus flew away. While the apparatus had been hovering above the shore, according to the boy, something had been thrown off onto the beach.

The case surfaced apparently only 4 months later in the newspapers and at least one SUFOI ufologist interviewed the kid. SUFOI managed to get approximately 50 kilograms of that stuff, a sort of lump of a dark material. They forwarded it for analysis at the Technological Institute, and received back an extensive analysis report. The report however concluded that there was nothing found about what the black stuff was of from where it came from.

It was the local residents who found out that it was actually the content from a paper sack of clay that one of them had thrown away on the beach as the aged protection paper had made the stuff too hard to be used.