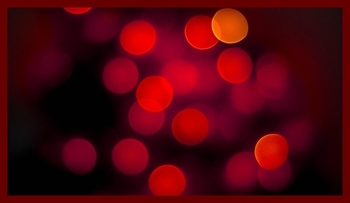 A South Dakota Sioux Tribe security officer reported that hundreds of softball sized red lights spun around his vehicle while driving home from work March 6, 2011, and that he had an encounter with two translucent beings.

The man's wife filed the report March 7 after her husband returned home visibly shaken, and apparently with missing time. The wife stated that the drive home from the casino usually takes 90 minutes, but that the events began around 11:15 p.m. and her husband arrived home at 2:00 a.m.

The man was driving alone in his vehicle when he noticed the red lights about 11:40 p.m. on Highway 63 about five miles south heading into Eagle Butte.

The red lights, about 100 to 200 of these red lights, kept going around the car for a couple of miles, the witness stated. They never got super close, like two car lengths away from me, but all around me.

A few miles down the highway, the man noticed that his car was slowing down.

When Highway 63 met a gravel road near a wind block experimental station, he noticed something standing along the road. I got a feeling of goosebumps all over me. It was tingly cold feeling all over me. Then I saw this thing on the side of the road where the gravel road meets the road and before I knew it, it was on the car. It reached in and touched my head through the windshield and ran its hand down my back. My back got real hot.

It had an oblong head, really thin body, thin arms and legs. It was translucent. It was glowing like a real dim light bulb cause you can see through it. Eyes were size of human, really long nose long in length. It has a really big mouth. Its arms were like sticks. They were parallel through each other. The two sticks looked like it was glowing. It was around 4' tall, but its arms stretched.

The other one, on the left hand side of the road had a face like a beast, horrifying, ugly, looked wrinkly, walked in a squat about the size of a goat. It was glowing too, reddish brown. It was wide and narrow.

The being along the side of the road disappeared quickly, but the alien that appeared to enter the car stayed with the man until he reached an area where there were homes.

The wife said her husband's head was hot and his demeanor was agitated when he arrived home. The husband also noticed that he had used up more gas than usual.

The following is the unedited and as yet uninvestigated report filed with MUFON. Please keep in mind that most UFO reports can be explained as something natural or manmade.

I am reporting this for my husband as he had to go to work. He works for the Standing Rock Sioux Tribe as a security officer. When he came home last night he said:

And he was visibly shaken. It took awhile for me to get his story out, but I typed it out as he told me. Below is his words. It should be noted that the usual drive from the casino back home takes 90 minutes driving normally. He said this started happening around 11:15 p.m., but he didn't get home until almost 2:00 a.m. March 6. He wasn't even aware that this had taken longer than normally and when talking to him he wasn't even aware that there was missing time. here are his words:

Witness, [name deleted/cms/tg] security guard [employer removed/cms/tg] Driving home in car alone after work at about the red lights started about 11:40 p.m. might've been later than that. The red lights are like softballs, hundreds of them, real light and spinning around the car south of highway 20 and was on highway 63 about 5 miles travelling south to Eagle Butte. The red balls spun around the car for what seemed like a long time, it was real neat. The Red lights about 100 or 200 of these red lights and kept going around the car for a couple of miles. They never got super close like 2 car lengths away from me but all around me.

After a couple of miles the car was slowing down. I was doing about 60 MPH but it slowed down to 40 MPH and wouldn't go any faster. Then the red lights just disappeared. They didn't fly off or anything they just disappeared. The car then went back up to 60 MPH like I normally drive it. I just thought it was kind of weird but kind of neat.

Then I got to where a gravel road meets 63 one of the wind block experiment station, soil erosion experiment, that's about 15 or 20 miles south of Timber Lake on 63, then I got a feeling of goosbumps all over me. It was tingly cold feeling all over me. Then I saw this thing on the side of the road where the gravel road meets the road and before I knew it it was on the car.

And almost as fast as I saw it it was gone, the one on the side of the road.

The one on the car it got to the point where I couldn't feel or see it anymore, I didn't feel like anything was completely gone until I got to the bison farm, 15 miles from Eagle Butte, Once I reached there was more farm houses everything was gone.

The car used a lot more gas than it usually does. It was over ¾ tank when started and used over a ¼? tank to get that far on 63.

I knew the sky was clear but couldn't see any stars.

Checked [name removed/cms/tg] for marks found none. His head was hot and demeanor was aggitated upon returning home.