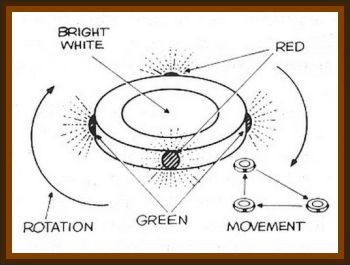 On the evening of September 6, 1976, the above witnesses viewed an oval shaped object from their home in West Simi Valley.

Mrs. J.L. describes the object in her own words as follows:

It sat in one place in midair for approximately 45 minutes, the sighting started at 9:00 P.M.

It had a red light on top and green on the bottom.

The position of these lights changed. There was a very bright white light in the center. The red and green lights moved around this central light.

It then moved straight to the left, up, and then back to its original position.

It kept moving in that pattern until approximately 11:15 P.M. The white light was much larger than the green or red. The shape seemed to be more round and not definite.

The object appeared to be 3½ miles away judging from the mountains in the background. Miss S.S.

The object wasn’t too large, airplanes and jets flying near it were bigger. Mr. M.S.

The witnesses were interviewed the following day over the phone. On September 7th, a similar type object was spotted at about the same time by Mr. B.D. who tried to follow it in his car and get some pictures.

This was about the same time as the first sighting.

The pictures never turned out, and the witnesses were unable to follow the object for very long, but did note that it repeated the same type movement as shown in the figure on the previous page.

All of the witnesses in this case were interviewed separately. All reported seeing the same type object as described. They seemed very concerned and were often at times confused as to how to describe what they saw in normal language.

Because the object made such strange flight patterns in the sky, and because the witnesses seemed to be highly reasonable people and not given to exaggeration, their story is highly believable.

Unfortunately, Point Mugu’s radar facilities do not pick up well in the Simi area below 3,500'.

No other reports have been received from the witnesses to date, and this case remains unsolved.