UFO Zooming Up Over Simferopol 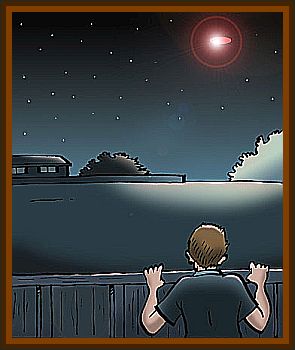 On the evening of Thursday, September 8, 2005, I’ve got the exciting telephone call from Victor, a resident of Sergeyeva-Tsenskogo street 34, in the old downtown of Simferopol, who reported that he just saw a UFO.

At 8:55 p.m. he was walking his dog near the building of the Soviet of Ministers, on the corner of Lenin’s square, right in the center of Simferopol.

He got the ache in his legs, and when he raised his eyes up, he saw the bright object at the northeastern part of the sky, emitting white or white/bluish light, approximately in 10 times brighter than Venus, as he said.

The object was hovering in the sky for several seconds, and then began quickly moving, zooming up and gaining speed.

The UFO then quickly disappeared from sight. It probably left the terrestrial atmosphere and started to space over our peninsula. The total time of the observation was about 15 seconds.