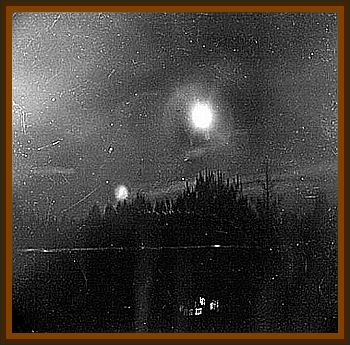 I don't recall the month, day, or year, but I'm certain that it was in the late 60s.

I was a teenager, and I had just gone to bed in our home which was on a farm near Silver City, IA.

I had not been asleep. I saw what at first I thought was a falling star. It became larger, and then I thought it was a meteorite. It didn't hit the ground, but rather shot back up at what I recall as being a 45° angle.

Then, It darted up somewhere over or on the other side of our house. I remained in bed and watched the sky. Several seconds later, it returned and darted over to an area where there are trees and a creek.

I remember it as being a rather large white light and approximately the size of a one of those big therapy balls. I didn't hear any sound.

It moved along about half the heighth of the trees. It then zipped through the air very quickly over to a hill located from the same field that I first sighted it in. It did not land. I saw it spin several times for just a few seconds.

It then darted back up into the sky at about a 45° angle at about the same location as it first appeared.

I went and woke up my mother and told her about it. We watched the sky for awhile, but it never returned. I remember that there were other reports of sightings around the Malvern area in that year also.