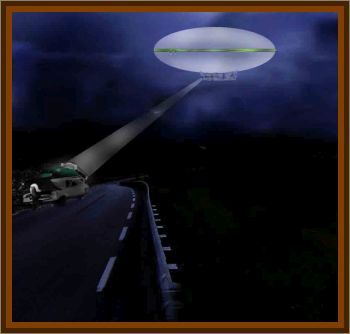 Paolo Caetano Silveira, 27, was enough to boggle the mind of even a veteran UFO researcher. He claimed that at 5:00 p.m., he was driving home from Tombos when he noticed a light which appeared to be following his car. He stopped at a police station and reported it, but the police did not appear disposed to investigate, but rather suggested that he engage a room for the night and continue his journey in the morning.

Silveira, however, was a typewriter mechanic and had worked all day at Tombos, and was anxious to get home to his family at Itaperuna, so he continued on his way.

At about 7:40 p.m. in an area near Itaperuna called Serraria, he saw the same, or a similar, light again. It came to a stop in front of his car and its bluish rays turned to white and his car engine stopped. The car rolled to a halt and then, two bright beams were focused on him and the two car doors popped open with no help from him.

Silveira said the two beams of light dragged him out of the car toward the large light, and he then became aware of three objects, man shaped and about 20" tall, which moved toward him. He said they moved mechanically, holding their arms at right angles to their bodies, but at no time did he refer to them as beings, always objects.

The objects did not touch Silveira but rather, the beams of light drew him to the large light and his legs were numb. He did not see the shape of the large light because of its brightness. Once inside the object, Silveira said he saw 3 beings, all of whom were dressed in blue siren, or jump suits, with a smooth covering over their heads which reminded him of Roman helmets. Their hands and faces were gray, but he could discern no features. The hands, he said, appeared to him to be transparent.

While inside the object, the beings moved around him and communicated with each other, but he could not understand them. A sound like a turbine engine was heard all the while that he was aboard.

The next thing he knew, he was lying on the ground a few feet from his car and Dr. Cirley Coutinho Crespo was talking to him. Dr. Crespo sent for help and Silveira was taken into Itaperuna where Dr. Bussade took over.

Dr. Bussade, who is Silveira’s personal physician and knows him well, made the following observations:

Silveira was highly excited, but his blood pressure was normal, his face was very red, his eyes were bloodshot, he had scratches on his hands and arms which terminated at the elbows, and his clothing was torn and dirty, as if he had been dragged.

He had not been robbed, nor had his car been in an accident, and Dr. Bussade was very firm in asserting that Silveira had not been drinking.

Silveira’s descriptions indicated that he might have been in a somnambulistic state for some of what he remembers is disjointed and not too clear. For instance, he said the inside of the UFO was very large and white, the beings inside were about 6 in number and there were a lot of little faces everywhere. They were about 20" tall. He noticed some buttons in the ship, he said, but does not relate them to anything such as a control board.

After the experience, Silveira complained of loss of appetite and a smarting sensation in his eyes. His wristwatch, which customarily lost about 4 minutes a week, was 15 minutes slow when he was examined by Dr. Bussade at the First Aid Station in Itaperuna.