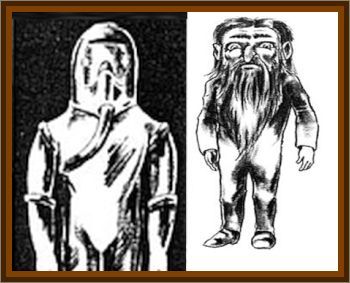 This abduction occurred at Bebedouro, Minas Gerais, Brazil, the afternoon of 4 May 1969. 24-year-old José Antonio da Silva, an enlisted soldier, was fishing on a lagoon when he heard voices, became aware of figures moving behind him, and felt a burst of light strike his leg. He dropped his fishing rod and fell to his knees.

Two beings, about 4' tall, wearing aluminum like suits and what looked like be helmets, seized him and dragged him to an object sitting on a dirt road. The object was shaped like an upright cylinder and had black platforms at each end. The soldier was taken inside, where the beings put one of their helmets on him.

Da Silva felt the craft rise. The beings talked animatedly among themselves in a language he did not recognize. After a long period of travel, he felt a jarring that suggested their craft had landed. The soldier was then blindfolded and led to a large room, where they removed the wrap from his eyes.

A being stood in front of him who was extremely hairy and slightly taller than the rest. His waist long hair was reddish and wavy. When the others took off their helmets, they were of similar appearance. Da Silva watched as the beings, at one point more than a dozen, examined his fishing equipment and took one of every item he had in duplicate. Later the witness noticed on a low shelf, the bodies of four human men, one black, and became terribly frightened. Later still, the beings gave him a dark green liquid to drink out of a cubical stone glass. The dwarf leader then began a strange conservation with the soldier, mostly about weapons, which was conducted entirely with gestures and drawings. Da Silva also understood that they wanted him to help in their relations with humans. When the soldier refused, the dwarf snatched the crucifix from the rosary Da Silva always carried with him. As the soldier began praying, a Christ like figure appeared to him, making revelations.

Shortly afterwards, Da Silva was blindfolded again and taken back to earth. As the craft landed, he felt he was being dragged and lost consciousness. He woke up alone near the town of Victoria, about 200 miles from where he had been fishing. He was dehydrated and hungry, but drank from a stream and was able to catch some fish as he still had his rod with him. Only his identity card, which the aliens had examined, had disappeared. He had a swollen knee where the ray had struck him and open wounds on his neck where the helmet had rubbed against his skin. He had been away 4½ days.