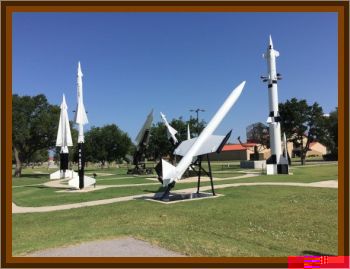 I was Sergeant of the Guard at Fort Sill. Bud Glade was on guard and reported that he saw a number of objects that would move rapidly in one direction and then shoot off at an angle in another direction. This was in the spring of 1951 as I remember. Bud was wounded in Korea but he should be living in Salt Lake City. I saw him a number of times after the war.

Anyway, I've heard of this flight behavior before. It was common in that day. Can you tell me what it was? It could have been military flights flying in formation.

I have another question you might answer. In Korea in the fall of 1951 the sky looked as blue as possible with possibly faint clouds. What we saw were wave forms exactly like those when you toss a rock into a pool of water. It looked to me that the waves formed far north. I thought that maybe there was a nuclear test in the USSR that send out the wave forms. Can you explain this atmospheric behavior? I've never seen a UFO but my dad said that he saw one of the cigar shaped critters over Zion’s or Brice Canyon back in the 1950s.

I saw part of the latest network TV show on UFOs. I also was watching the History Channel tonight with the Chinese stuff. I'm not a member of the Church of the UFO, but I do enjoy listening to what others say. The problem in my opinion is that there are too many nuts and too little hard evidence or plausible explanations. But UFOs are fun and some people make their living that way.

I heard that Nuclear Scientist speak at ISU in the 1960s. I've forgotten his name, but he was making a buck touring around. He was not very convincing but he was fun to listen too. Besides, ISU was paying his fees and it was free to me. His stuff didn't impress me at all at that time, but he has gathered more since.

I remember in the 1950s that a UFO went flashing over the Salt Lake City Airport. I could see that it was an airliner after studying the thing. I also knew that there would be many UFO reports. There were. I called the newspaper and told them that it was an airliner. They did not retract their story even though they told me a zillion people had corrected them. So the story is still in there for anyone to read in the library with no retraction. So it became part of UFOlogy or whatever it is now called.

Anyway, I do hope you are having a great time with your stuff. Are there UFOs? Of course there are. They are flying objects not identified. Nothing more until someone comes up with credible hard evidence and shows it to the world.

I'm sure that any aliens would run like scared rabbits if they came within our radio traffic (and could understand us) or if they picked up our nuclear explosions. I wouldn't expect any hint of them after 1945. What really scares me is that we could someday send our species out to ruin the rest of the universe. Fortunately, the earth has a cycle of mass extinctions that might protect other worlds form our influence.

We can always hope. But what will protect us from theirs? I'm betting on pneumonia.