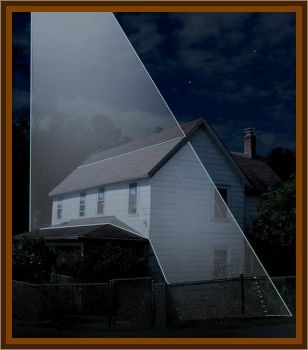 I have purposely kept this story to myself for 40 years, but remember it like it was yesterday.

I was a teacher in a 3 town School District in Southwest Iowa. One day at school all the kids were talking about seeing a UFO that hovered over the gymnasium as the crowd came out from a game. The same UFO later followed the away teams school bus and the bright light that shown on the bus forced it to pull over. Behind the bus were many parents cars and the chief of police of the away teams town. They were all witnesses.

That same night, one of the cheerleaders and her boyfriend were chased by this low flying noiseless craft shining a bright light on them. On arriving at the girl's house, the girls family came out into the yard to see what the light was, all of these people were witnesses as well.

My friend and I were both teaching at this school, and decided to go out the following night and take our cameras and tripods and see if we could witness what everyone was talking about. He and I were both very level headed people who did not drink and were born skeptics.

We drove along a River Road, that was west of Tabor, next to the Missouri River. This placed us only a few miles from Offutt Air Force Base, headquarters of the Strategic Air Command, on the other side of the river. As we drove north on the River Road, my friend and I saw what we thought was a greenish yard light at a farm, but then noticed it was moving toward us at a rapid speed.

We stopped and got out of the car and began to place our tripods, to take pics. As we prepared to shoot the pics the UFO which had been traveling south approximately 100' off the ground shining a bright blueish green light over the ground, abruptly shot up at a 45° angle and behind the river bluffs. When it did this there was no sound except the rush of air around the object. We got in our car and drove up a bluff road to see if we could find it at a higher vantage point. We didn't see anything of it and drove back down to the River Road, talking about what it could be. We were out of the car, talking by the road side, when I noticed to the south, a light moving slowly from east to west in the sky at about 10' to 30' high in the view. It was moving slow then it fell almost at the speed of a falling star, leveled out and began to move slowly north up along the river banks of the Missouri River. My friend and I immediately set up our cameras, and it continued moving North and just slighly, less than 1/8th mile, to the west of us. It passed us and continued north, and during that time my friend and I both took 5 or 6 photos. then it once again changed directions moving East, for a bit then shoot up almost instantaneously at a 45° angle and behind the bluffs again.

My friend and I went home to his darkroom and developed the photos. We both had images of the UFO showing arrangements of lights and a vague shape of the UFO.

The next day, I took one of the photos to school. When I had the students in class who had seen the UFO on the nights before, I asked one student who had seen it close to go to the board and draw what he saw on the board. He did, and then I showed him the photo I took. I asked him if that was what he saw. He enthusiastically said yes it was. All the students who saw the photo that day said that it was what they saw. And his picture looked like my photo.

A day or so later, my friend called me and said that his home had been broken into and that the negatives and photos had been taken from his darkroom. Also, his camera had been opened and a roll of film taken from it, that film was unexposed, but was taken also and the camera left laying open on his workbench. A short time later, the one photo I had disapearred, and my friend and I were kind of in a state of shock.

We never talked about it again. I thought many times to tell the story to someone, but, i honestly had a fear to tell it until this time. Its like something told me not to talk about it, you know? I think that there is something very odd about the fact that out of hundreds of witnesses and very reliable ones at that, the school bus driver, the crowd coming from the gym, the chief of police of Sidney, Iowa that followed the bus home, teachers etc, it is very odd that this story did not ever get out because I have looked for it in various ways, wanting to know more but being afraid to talk too much.

Now I'm retired and wish to tell the story, I have a lot more detail, for instance, at the time the school bus stopped, one set of observers said the UFO hovered over the bus and the bus stopped on its own, but others said that the light was so bright the driver had to pull over and the cars behind all took to the shoulder to see what was happening.

My feeling and my friends feelings at the time was that it was something secret that was being tested by the Strategic Air Command.

But all these years have gone by, and there's never been any aircraft developed that could do what this aircraft did.

The rapid descent and ascent, passing so very close to us, with the river bluffs at our backs, with no echo, no buffetting of prop like a helicopter would have, only the whoosh of air sound, as it passed, not loud at all almost a whisper. Its been a mystery to me all these years, but I definitely know that there are at least a 100 other people who saw the same craft over a 3- 4 day period. I wish that I had the date exactly,

I dropped this from my active conscious thought, as soon as it got too creepy with the film and photos being taken.

I would like to know if any of the other people who witnessed this have reported it also. I'm not using my friends name, because I know that he, like me, was not anxious to talk about it.

But now I want to. I dont know how to answer about having an investigator contact me, it asks if I want that, I dont object to that, lets put it that way.