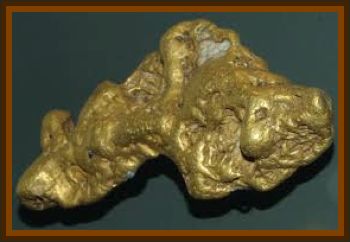 Tom McCully of Merced does not claim to believe in unidentified flying objects, UFOs, but he has what he thinks could be a fragment of something from outer space.

The object, about the size of a golf ball, was sent by McCully to the International UFO Registry in Hammond, IN, which in turn turned it over to the University of Chicago’s Argonne Laboratory for tests.

McCully said it previously was examined by a gemologist in Merced, who tested it and said it is not metal.

In the letter, Lemmon said the sample was checked with a spectrograph but the melting temperature is so high that the carbon arc wouldn’t melt it.

Lemmon suggested the use of more sophisticated equipment than found at the college.

He, however, noted that the sample does have the appearance and density of pure silicon, one of the few elements whose melting temperature is too high to run through the spectrograph. So I’ll guess at that.

However, I wouldn’t hazard a guess as to where it came from and there are many compounds that contain silicon, Lemmon stated.

McCully says he knows where, to some extent, the object came from and therein lies his story.

According to McCully, who owns an appliance store at 1777 Crows Landing Road, Modesto, he found the object 4 years ago while fishing in the high Sierra near the Stanislaus River.

He said he had gone camping alone and was up before dawn fishing when he first noticed a bright pulsating light reflecting off the water.

He said the light seemed to grow bright and then dim and at first he thought it was a forest fire although he neither heard any crackling of flames nor smelled smoke.

Then he said there was a sudden brilliant flash and something like hailstones pelted the area around him.

Frightened, he bent down, he said, to pick up his fishing pole, which had dropped, and noticed what appeared to be a gold nugget. He picked it up, put it in his shirt pocket and then went to his sleeping bag and rolled it up in preparation to leaving the area.

He said that as he did so he noticed that bark of the trees in the area had what looked like fresh scar marks, similar, he said, to what would have happened if they had been grazed with bullets.

Once back home in Merced, McCully said he told his wife of the incident. But when he searched his pockets for the nugget, it was gone. Since I couldn’t prove what had happened I kept my mouth shut, he said. And as time went by he forgot the incident.

That is, he said, until early in July when, while preparing for another camping trip, he got out the sleeping bag. As he rolled the bag out on the driveway, out rolled the mysterious nugget.

McCully subsequently showed the object to other people, including a friend who informed him that a Dr. A. Allen Hynek had offered, through several magazines, a reward of $50,000 to anyone able to prove through physical evidence the existence of UFOs.

That led him to have the object tested by the gemologist and the geologist and eventually to chiseling off a smaller piece of the nugget and sending the larger piece to the UFO Registry. Now it is a matter of waiting for the results of the tests. Meanwhile, McCully is willing to show the fragment he kept to anyone interested in seeing it. And he says he is negotiating to sell his story to the National Enquirer.

The mystery of Tom McCully’s space nugget has deepened with word that laboratory tests show the nugget, which is non magnetic and can’t be detected by a metal detector, is 99.4% iron.

McCully, who found the nugget 4 years ago in the high Sierra, said he received word of the lab tests in a telephone call yesterday from Dennis Hauck of the UFO Registry, Munster, IN.

He said Hauck told him the nugget had been tested by scientists with the University of Chicago’s Argonne laboratory and that the Smithsonian Astrophysical Observatory is the next step in the testing process.

NASA also is interested in examining the object, according to McCully.

McCully, operator of a Modesto appliance business, said Hauck’s reaction over the telephone to the Argonne tests was one of amazement.

He told me its silly, it, the nugget, can’t even exist.

McCullv said there is a theory that the nugget seems to have been manufactured but no one appears to know who made it. He said Hauck told him NASA is dealing with stuff so secret the space agency won’t even discuss it.

McCully, then a Merced resident, found the object 4 years ago while fishing alone along a stretch of the Stanislaus River. He said it was about dawn and he had just walked down to the river when he noticed what appeared to be a pulsating light reflecting off the water. Then he said the light grew brighter and there was a sudden flash and something like hailstones pelted the area around him.

He said he became frightened, bent down to pick up his fishing pole, which he had dropped, and it was then he noticed the nugget. He picked it up, stuffed it in his shirt pocket and after repacking his gear left the area and returned home.

McCully said he did not rediscover the nugget until last July when, while preparing for a camping trip, he found it in a sleeping bag. He said it apparently had fallen out of his pocket while he was rolling up the sleeping bag 4 years earlier.

He said he showed it to various people and was urged to send it to the UFO Registry.

Although he started out with only one chunk, McCuily said the material, while extremely hard, also is brittle and he managed to break it into 3 nuggets, one of which was sent to the registry.

He said the other 2 pieces are in a safe deposit box. He also said he has been advised by Jauck to safeguard the nuggets and not to return at this time to the Sierra site where the original nugget was found.