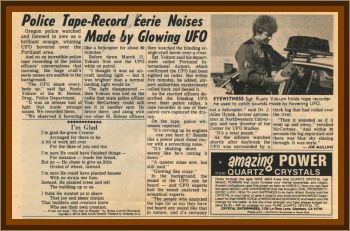 At 4:03 a.m. on March 17, 1981, SHPD Sergeant Russell Yokum reported a close encounter of the first kind. Yokum was patrolling Highway 30 west of the Columbia River when he spotted a bright light moving in an easterly direction toward the Portland Airport upriver.

While aircraft were known to regularly pass over the area on the way to the airport, the light was unusually bright, so much so that it lit up the river like the sun was just coming up.

I thought it was an aircraft landing light, but it was brighter than a normal landing light would be, Yokum told The National Inquirer in 1981.

Convinced the light was not an aircraft, Yokum radioed headquarters and then headed to the county courthouse to view the UFO from the banks of the Columbia River. A few local citizens and two Oregon State Police officers, Ricky Cade & Tom McCartney, joined him there and Yokum got in contact with Donald Askins via CB radio. Askins lived in a home across the river in Ridgefield, WA, and went by the handle Lucky 13. He could not only see the light, but hear it, too. Askins reported an eerie and extremely loud noise that sounded like a power plant diesel motor and a screeching noise in between.

Baffled, the officers set up a portable tape recorder 18" from their police radio to record their conversation with Askins, and to catch the sound if it happened again. Askins offered to dangle his CB microphone out the window so he could transmit the sound, and the police drove to a nearby bluff that gave them a better view.

One of the officers says in the recording:Hey, Lucky!

Officers:We’ve got a tape recorder sitting here by our radio whenever you’re ready. We’ll keep her running. If it starts up again, just key up and we’ll record a little bit of it.

Officers:I just don’t want you to think we had a screw loose.

Lucky:Now all it is is just an orange glow. That’s all I can see.

Officers:Awfully early for the sun. I don’t think the sun would just be in that one spot.

Then, at approximately 4:29 a.m., the light emitted the strange sound again. According to the Inquirer, UFO experts had the sound analyzed by acoustical experts.

They were equally puzzled.

At 4:43 a.m., having been surrounded by a thick fog that rolled over the river, the light went out.

McCartney recalled to the Inquirer:Then it sounded as if it went up and away.

McCartney continued:And within 30 seconds the fog separated and there was a blue sky shining through. It was eerie.

It’s a strange story to be sure, and it begs the question, what would happen if aliens actually visited St. Helens?

In the spirit of Halloweentown, and all things unusual, we spoke to SHPD Chief Terry Moss to find out.

The Chronicle:Is there an SHPD response plan for UFO sightings in St. Helens?

Chief Terry Moss:We have a whole policy manual but we don’t have an Unidentified Flying Object Policy

Moss:No. I’m sure that there are people in the world that believe we have a Bigfoot policy and a UFO policy...

Moss:Maybe we should start to work on that.

The Chronicle:Are you aware of any UFO sightings during your tenure as chief?

Moss:The one we’re talking about didn’t happen when I was here, but Russ Yoakum was the officer that saw the UFO. He’s now passed away so that story is lost in history. When I came to work here, he was already gone, he didn’t work here anymore, but that story had lived on and been passed on. I’d heard versions of it. At first I was like, C’mon. Ya know? And the other guys are like, No no, seriously, he says he did. It went out on the radio and TV news channels came out and did stories on it.

The Chronicle:Do you have a contingency plan for contact with alien life forms?

Moss:We have access to a service called the Language Line, so if I come across somebody that doesn’t speak English I can dial up this number and have an interpreter on the other side. I can give them the phone and they can help us have a conversation. I’m going to guess an alien probably doesn’t speak English. I don’t know if Language Line is prepared for alien translation but it would be a good place to start, I guess. Klingon and all that, I don’t know if there’s anyone around that actually speaks it, so we’d have to use that Language Line to get past that take me to your leader thing.

The Chronicle:Chronicle: If the aliens are hostile is the SHPD prepared to defend the city?

Moss:No, our highest powered rifle would probably be ineffective against their advanced weaponry. I would guess that it would be difficult. Based on all the stuff I know about them, because I’ve watched a lot of TV, we’re not prepared. Laser beams and … yeah, we’ve got nothing for that.

The Chronicle:Who would represent St. Helens during contact? You? The Mayor?

Moss:It would have to be the mayor. If they said, take me to your leader, I’d take them right to Rick Scholl.

The Chronicle:If they were friendly would we set up a situation to welcome them in?

Moss:Yeah, why not? Give them a key to the city or something. That would be a big deal, wouldn’t it? You wouldn’t want to be known as the city that shunned visitors like that. I think you’d have to open the doors and embrace it and share. You know that whole exchange thing where we go live with them for a while and they come live with us for a while? Like sending kids on an exchange mission? Yeah, we should invite them in.

The Chronicle:What if one of them wanted to join the police force?

Moss:We are always hiring and we welcome diversity. I’ve got to believe that that would be a huge asset to the organization if we did that.

The Chronicle:Do you personally believe in the possibility of alien life?

Moss:The more I think about how big the universe is, I’ve got to believe that there’s somebody out there. In the billions and billions and billions of miles, you’ve got to think there’s something else going on. Are we really it? I don’t know. TV certainly compels us to believe that there are others out there. Or maybe they’re looking at us and they’re shaking their heads going:

Moss:Oh my god, what in the world is going on over there on that little blue planet? Stay away from that place.