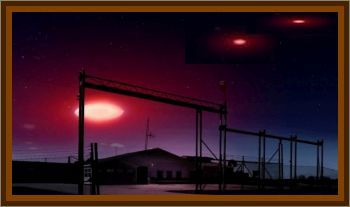 A former Rochester councilman, John Karcher, owner of a farm in Daugherty township, was outside the city of Rochester with a friend, Lee Plunkett.

They were outdoors with a clear view of the sky and from the direction of the nearby town of Ohioville something strange approached at an altitude of 2,000'. Both men spotted it and were astonished.

The thing was a big luminous torpedo they estimated was 200' long, the top half green colored and the bottom half a reddish orange, the two colors separated by a strip of yellow. The thing was moving slowly, perhaps as slow as 15 miles per hour.

Karcher had enough time to get a pair of binoculars and to phone some neighbors, a Mrs. Norderbugger and her daughter and son-in-law. These three neighbors managed to observe the object as it passed by on a steady course to the south, in the direction of the Shippingport Atomic Plant.

Karcher saw nothing worth mentioning with the binoculars and like everyone else believed the show was over when the UFO moved out of sight. To the surprise of all, the torpedo reappeared after a few minutes, retracing its course.

In Mr. Karcher's opinion, the mystery ship made a U-turn over the nuclear facility, considering its speed and distance involved. This suggestion was taken seriously by the Air Force and the FBI.