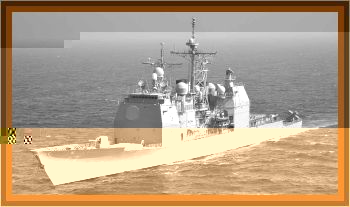 We were about 50 miles SE of Coronado Island, off the coast of San Diego. I noticed a light on the horizon, as we moved further the light became brighter in intensity, so bright, that it seemed the sun was coming up. When we reached the approximate vicinity of the light source I found that it was only a distance of about 4 to 5 nautical miles away. It was lighting up one entire side of the ship.

The object I saw creating the light source was a triangular cluster of lights that seemed to be perched right on the surface of the water. As I took a look at the object through my binoculars and the ship's big eyes, an incredibly high powered magnification unit, I noticed that each individual light seemed to be putting off some sort of a visual gaseous fume, much like an F-16s after burner.

After visual confirmation, I notified the Operations Specialist that I had a visual contact on the water bearing at 090° I asked him if he could spot a contact on his radar screen, to which he replied: No, I have no contact at that bearing. I then repeated the bearing and asked him to check again, his reply was the same: No, I have nothing on my screen.

I then asked the aft look out if he could see the contact I was referring to. He reported that he could see the object as clear as day and asked me for more information on it. I then asked the Operations Specialist to ask the Officer of the Deck to come out to the starboard wing and take a look at the unusual surface contact. He looked at the object for several minutes and when I asked him what he thought it might be he had no information to give me. He told me that it was nothing to worry about.

As we moved on into the night, I repeated the visual scan of the object in an attempt to ascertain what it's purpose could be. The cluster was amber in color and six individual lights comprised its shape. It remained absolutely motionless and the lights never wavered, remaining in a fixed position the entire time. While I could not see the actual source of the lights, my every instinct told me that they were attached to a common object and not necessarily singular in nature. To this day and hour, I cannot understand why neither the Officer of the Watch nor the Operations Specialist onboard my ship seemed the slightest bit concerned, alarmed or curious about this seemingly unexplainable occurrence.

I was soon to learn that I would be witness to yet another incredible and bizarre experience. It was several months later that our ship was once again out to sea, this time in the Pacific ocean. It was approximately 1:30 a.m. and I was standing starboard look out again. I had been watching the foam churn up around the hull of the ship as it passed through the water and the glow of the phosphorus turned the white wash to a luminescent green. My attention was suddenly turned toward what looked like an approaching surface contact. Within a few moments, I could tell that the object in question seemed to be below the actual surface of the ocean. The contact was a mere 300' off the starboard side, just aft of our ship at a bearing of approximately 165°. As I examined the approaching contact, it seemed that there were only two white lights, parallel to each other. I realized that this contact was not on the horizon, about 10 to 12 miles. The contact appeared to be riding along side of us, and at the same time, beginning to accelerate past us. Shortly thereafter, the messenger of the watch came out to the starboard wing, by this time, I had reported the contact to the bridge, followed by the Conning Officer, the Boatswain's Mate of the Watch and the Operations Specialist. We watched the object pass us while it remained fully submerged at a depth that seemed only 25' to 30'. The object appeared to be moving at a speed only slightly greater than our own.

We all made our guesses as to what the object might be, but no one single person was absolutely certain of what it was. The fact that the object was so near prompted us to shine a flood light in its direction. In doing so, we still could not ascertain what the lights were connected to. Keeping in mind that a submarine has no under water lights attached to its hull and it was clearly under the surface of the water, we quickly ruled out the possibility that it was anything normal. We continued our present course and speed until the object had completely passed us.

The captain was not notified of the incident at the time, and I have no idea as to if he was ever, I was not privy to that information. We were all left scratching our heads.