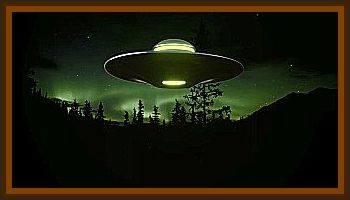 Sherry's first experience occurred when she was only eight.

She lived with her parents in rural New Jersey.

One night in the early 1950s, Sherry awoke to find herself outside her home, standing in a nearby field. She had no idea how she got there, but looking up, she saw a small, metallic, saucer shaped craft hovering above her. It instantly swooped down and sent down a beam of light directly on her.

The next thing Sherry realized, the craft had struck her with a beam of light and she was lifted aboard.

It was like a flashlight. It was a very strong beam because I went right up into the craft. My sensation of fear left me. I was so afraid when it was chasing me.

At that point, Sherry remembered nothing but waking up the next morning. At first she thought it had been a strange dream, but she realized that she had a different outfit on then when she went to bed, and her clothes were inexplicably dirty.

Whatever had happened, it wasn't a dream.

As she grew up, Sherry began to have bizarre nighttime experiences, half remembered dreams and recollections of grey type aliens standing around her bed. She began to awaken with unusual marks and scars on he body. Over a period of years, she slowly began to connect her experiences, and wondered if she was one of those people labeled as UFO contactees.

Of course, this was no sudden revelation. She knew something strange was going on, but extraterrestrials? It seemed too outlandish to even consider.

Then in the 1960s, Sherry experienced an event which left no doubt in her mind that she was in contact with extraterrestrials. It remains one of the strangest encounters ever investigated.

Sherry was driving alone in the middle of the night through the Watchung Mountains of New Jersey when she lost control of her motorcycle and crashed. Because it was so late at night and the road was totally isolated, there was no traffic at all. Sherry was totally alone.

Or so she thought.

Moments after the accident, Sherry was startled to see 3 strange figures. She instantly recognized them as the figures she had seen before, in her bedroom at night.

When I was driving on a motorcycle once in the mountains, I had an experience, these same people appeared to me. They were like greys, more detailed, more white, not quite human. I would say like a body suit on a human figure, a white body suit, not a grey one, but maybe an off white or a beige grey.

They looked at me and silently picked up my motorcycle, took the bar and straightened it out into a kick stand again. I nodded and kicked it. It was just like, okay. I kicked it, we didn't have electric starters at that time. I kicked the motorcycle over and off I went.

Sherry was astonished by the event. She was already shaken up from the accident, but the appearance of the figures took her totally by surprise.

They were both right there. They were about 18" away. One looked at me. They both looked at the one doing it. They were both like greys look, without clothes. They didn't have any attire on or anything on. They looked like greys except they were more human proportioned. Except they did have the dark eyes, but not as almond shaped as that. It was the only thing dark that appeared on them.

And I wish now I could have not been so worried and disturbed, or that I could have paid more attention. But they weren't threatening. They just kind of nodded and went on their way, they looked almost luminous. So it was kind of strange. It was very strange.

Although that was Sherry's most intense face to face encounter, she continued to have a number of other close up sightings of metallic craft.

Sherry's case is difficult to classify. Although she did experience an apparent missing time abduction, she has also had an undeniably positive encounter. She has no desire to be hypnotized, and is content to call the aliens her friends.

It took Sherry a long time to conclude that she was having encounters with aliens because the figures looked almost human, the only real difference being that their eyes were larger and darker than humans. Sherry is only one person of many who have moved beyond abductions.