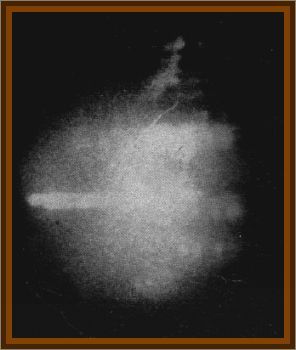 Television newsman Bob Campbell has been monitoring police calls on his radio, and two police highway patrols discuss reports of an UFO tracked on radar and streaking towards the Texas border. He left his home at 3:00 a.m., armed with a 4x5 Speed Graphic and Tri-X film, and drove into town, where he met the Chief of Police.

Together the two men searched for the object, and soon sighted it hanging stationary 13 miles east of Sherman, on Highway 82. Its outline was clearly defined in the north eastern sky, and the photographer set up his camera. He took four exposures, two minutes each at 3 minute intervals.

The object's shape was a cylinder with Mercury capsule shape at one end, possibly rounded at other end. Several distinct bands around diameter of cylinder, with disk shaped bosses on its surface. An extrusion of luminosity from one band, and an ejection of an unknown material accompanied the object.

The remarkable aspect of this particular incident is that, having been alerted by the same radio broadcast, several other individuals were also watching the object.

Campbell and McCollum were one mile east of Bells, Oklahoma. Highway patrolman Bill Quires was watching from Durant, 30 miles north of Bells, and Department of Public Safety Dispatcher Jim Faglia was watching from a point 7 miles south of Sherman, thus precluding the possibility that the object could have been a planet or a star.