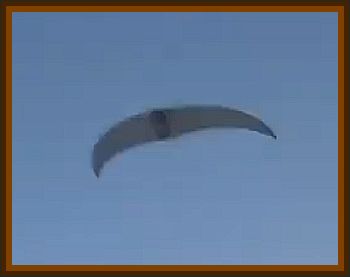 While employed as a rigger on this remote island, Eldon L. White was wandering around looking for blue fox burrows on his day off, when a whirring whining sound caused him to look up.

About 300' above him, falling leaf like towards the water was a gray, bat shaped craft.

It was about 30'. The leading edge of its wings was spaced with round openings emitting a greenish/yellow glow.

Around 75' above the water this craft commenced hovering for a few seconds, then fell off into a steep angled glide and disappeared beneath the water.

Eldon gaped and waited quite some time for it to surface, but it never did.