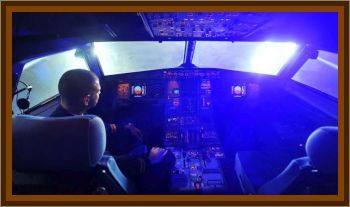 The Irish Aviation Authority is investigating a unusual sightings by a number of pilots of commercial aircraft while in contact with Shannon Air Traffic Control.

On the morning of November 9, 2018 the pilot of British Airways flight BA94 from Montreal, call sign Speedbird 94, called air traffic control in Shannon to report seeing an object moving past her aircraft, and asked if there were any military exercises taking place off the west coast of Ireland.

There's nothing showing on either primary or secondary radar. According to a recording of the conversation by Airlive, a site for enthusiasts, the pilot was told there were no military exercises in the area.

Several commercial aircraft reported seeing at least one bright light with one pilot stating that the UFO was going at an astronomical speed of at least Mach 2, 1534 mph, which is twice as fast as a commercial jetliner.

Also wondering were pilots flying nearby, who saw the same, well, whatever it was.

A pilot from a Virgin Airlines plane, callsign Virgin76, from Orlando to Manchester, came on to air traffic control and suggested it might be a meteor or another object making some kind of re-entry. There appeared to be multiple objects following the same sort of trajectory. They were very bright from where we were, it was not something but somethings:

The pilot also confirmed that he he had seen two bright lights that seemed to bank over to the right and climb away at speed at least from our perspective.

Another pilot also weighed in, saying: Glad I'm not the only one.

An IAA spokesman said the authority is investigating the incident and will file a report. This report will be investigated under the normal confidential occurrance investigation process. The spokesman added that it was unlikely to be aliens from another planet.

But for many people who read between the classified lines, there was no need. We already know the truth.

This is normally the point at which chortling naysayers would shout their disbelief. After all, for decades the public has been told that aliens don't actually exist and that people who believed otherwise were crackpots in tinfoil hats.

But in an admission straight out of a B movie, the Pentagon recently confirmed that there was a $22 million government program to collect and analyze anomalous aerospace threats, government speak for UFOs.

And Area 51, the secret base in Nevada whose existence had been denied by the government for decades, has existed for decades, the government admitted. It was a test strip for a CIA spy plane and other classified aircraft, according to a CIA history declassified in 2013. And because the government had a giant secret test base in the Nevada desert, it used the area for all kinds of secret testing, putting the A-12 aircraft and the angular F-117 stealth ground attack jet through their paces.

So who needs a tinfoil hat now?

The admission lent an impression of viability to a century of bizarre, unexplained phenomena.

But what of the bright lights over the Atlantic seen by not one but two airline crews responsible for the health and well being of hundreds of passengers?

Sure. We believe you.