I Remember We Weren't Scared 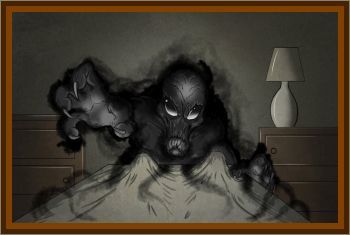 My true story. My wife and I will swear to it in front of any person on this planet.

We lived in a fairly new double wide mobile home that sets on a spot that has never had house of any kind and is at least half a mile from where any house has ever sat, so you would not think that it would be a likely location for a haunting.

However my wife and I have on occasion seen some rather strange things there, the most startling of which I relate here:

One night after an uneventful day my wife and I retired for the night, we sleep in a large waterbed. Some time had passed and I was unable to sleep, my wife's breathing had become regular and reached a point at which I assumed that she was asleep.

It must be also known that we leave a light on in the bathroom farthest from our bedroom because we normally have children in the house, however that night there was no one in the house except my wife and I, but the light was on as usual casting a glow through our open bedroom door which weakly lit it.

While lying there unable to sleep, I became aware of a presence and suddenly and silently a figure moved through our bedroom door and proceeded parallel to our bed.

Then rounding the corner of our bed took up a fixed position at the foot of the bed.

I was aware that this entity was conscious of us and was intently watching us as we lay there. The entity can best be described as a something that had the appearance of black smoke or a shadow, however it was more material that either of these but less material than a real person.

The most odd thing about this is my lack of fear.

Although I was acutely aware of this being and the fact it was not of this earth as we perceive it, it did not seem to arouse any fear response in me, I would say it aroused a feeling that would fit somewhere between creepy, awed, and curiosity especially considering the fact that it was aware of me as I was aware of it.

After some time I almost convinced myself that I was imaging it, but then I became aware of the fact that my wife was no longer breathing like she was asleep, but was breathing almost silently. I then asked:

To which she answered Yes.

Do you see anything?

Expecting her reply to be:

What do you mean? But much to my surprise she answered:

You mean that thing standing at the foot of the bed?

At this time I did become somewhat nervous.

We laid there for about 10 minuets and then it was gone. It just over a period of about 10 seconds became less solid and our perception of it's presence became weaker until it just wasn't there any more.

Then it was if it had never been there. Nothing like this has happened since and the only evidence it ever existed is my wife's and my memories of it.