Face To Face With A Shadow Being 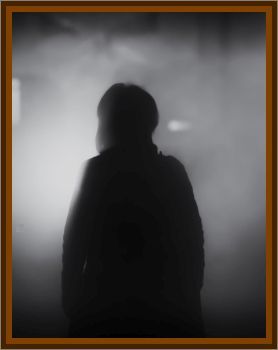 About a week ago, a co-worker and I were chatting and I mentioned how much I enjoy reading and watching things about the paranormal.

He said he had taken an interest in it as well because he and his wife actually live in a house that’s haunted. It’s weird because we have known each other for nearly two years and this is the first time anything like this had come up.

His wife showed up to pick him up from his shift and he said to his wife that he explained to me about their house.

She began describing some of the things they have seen and heard and he invited me to come hang out, that maybe we would all see something so that it would be more than just the word of the two of them, they have told their families about it, but got completely blown off.

Anyways, last night was the only night he and I had the same evening off so he gave me directions and I showed up at his place around 8:00 p.m. We ordered pizza, had some beers and basically laughed and joked nearly the entire time. At around 10:30 I was like, well, nothing has happened, as I expected, so I guess I’ll take off. My friend said before I go I should see his manga collection, so I was like ok cool.

He took me into a spare bedroom where he keeps all of his collectibles and while we were in there, I looked up to see his wife’s face go white as a sheet. She is looking behind us, facing the door. I see my friend turn his head to look behind me and his jaw just drops.

I slowly turned my head and right there in the doorway about 5' from me is the solid black outline of a person just standing there.

We stared at it for a good minute or so not saying anything and it just gradually faded. Then we all looked at each other just awe struck. They had never actually seen anything like that before, mostly just sounds, smells and feelings and maybe a fleeting shadow like one time.

Needless to say we were all just flabbergasted.

It didn’t feel threatening, but it was very cold in that hallway as we walked out. I could barely sleep when I got home. I just can’t believe it. To now know that these things are real. I’m just questioning everything right now, I can’t concentrate on my daily routine at the moment. I can’t get that image out of my head. It was amazing, not even really scary.