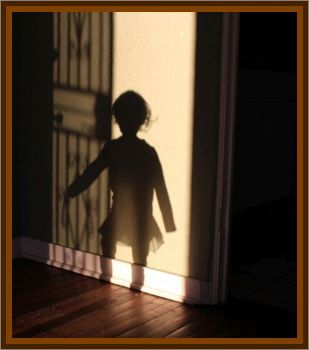 One of my close friends lived next to a house that was always vacant. It would sell, people would move in, and then one day they’d be gone and the house would be up for sale again. One summer, when the house was listed again and the last family had moved out, we decided to go take a tour and eat some Jack in the Box we had picked up. We weren’t very smart sometimes and thought it would be cool to play chicken with whatever was haunting this house.

My friend was really skinny and crawled through the dog door that led straight into the kitchen, then opened the back door for me. We went through all of the rooms and it was pretty nondescript, just a typical 50s style bungalow house with a similar layout to his home, lots of pretty woodwork and built-ins.

After we determined that the house really wasn’t that creepy after all, we sat down in the dining area, on the floor, across from a little horseshoe shaped nook with a kitchen table and built-in bench. It was dusk out but the windows didn’t have curtains and it never got that dark in our city, anyway. At this point, we had been in the house for maybe 25 minutes and after we finished eating we stayed sitting just to hang out and talk since we weren’t spooked out at all.

All of a sudden, mid-sentence, completely out of nowhere, my vision went black and I felt this eery coldness wash all over me, I’m getting chills thinking about it, a feeling so thick I felt like it penetrated through my body down to my bones. At the very same moment this happened, my friend screamed. I virtually could not see anything and was groping around trying to find something to grab onto and I felt so unsettled and cold. There’s really no other word for it. After what felt like hours, I felt my friend’s hands in mine and he pulled me to my feet and drug me through the house to the back door. He kept pulling on my arm and I still couldn’t see anything. We got outside and slowly you know that feeling when you get a whole body shiver and it runs down your spine?

As soon as I was outside, that’s what I felt, except this was a whole body shiver that started at the tip of my toes and went all the way up to my scalp, and unexpectedly and suddenly I could see again. My friend was as white as a sheet and looked absolutely terrified. I felt off, and sort of, gross, I guess is the best word, and in shock. I told him that I couldn’t see at all until I was outside, that it felt like I had been enveloped in blackness. He was just staring at me and I finally asked him why he had screamed. He hugged me and told me that he pulled me out of the house as soon as I started reaching around like I was blind because a little girl who was completely black, and yet see through, crawled out from under the table we were across from and sat on top of me.