Shadow Being, Or Something On Drive Home 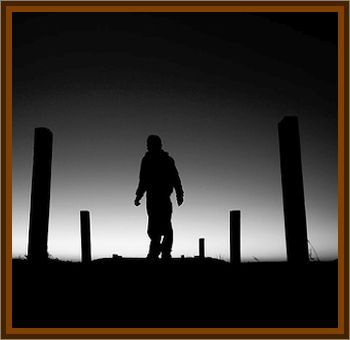 I, too, have seen one of the shadow people and would like to add my story to your collection. My experience wasn't quite as close up as some of the others I've read, but similar all the same.

One night, this was in early 2000, my husband and I were driving home from the grocery store. It was dark out already and raining. Our apartment is maybe 5 to 10 minutes from the store we go to. We certainly weren't in a spooky mind set, we just wanted to get dinner started. As we began to drive across the overpass to a freeway, I saw a human like figure walk to the middle of the road and look directly at our car. The bizarre part of it was that this figure had an amber eyeshine, but even as our headlights began to graze the rest of its body, no other features became visible. It was as if the light had hit a shadow that would not fade.

As we approached the figure, it leaped into the air and seemingly rolled into a ball into the guard rail on the left of the road. Then, we could see only darkness. I looked at my husband and said:

He had seen it too, and could not explain it and was even more suprised that he had not been hallucinating.

I have never heard of anyone else seeing these figures until I saw it online. Knowing that others out there have seen these shadow people both comforts me and creeps me out.

I do not have any, and I mean any clue what it was that we both saw, but it must have been something. Maybe a yeti or a demon or maybe it was some tripped out human, who knows?

I believe what I saw and not what I think it was...our experience speaks for itself.

I guess the real question is: are these beings something new to the earth or something old? And are they beginning to appear more and more for a reason?

Maybe we'll find out in our lifetimes, and maybe it will be a short lived phenomenon, but I think all those who have seen it know that it was not a play on the imagination, but something we can't help but believe.