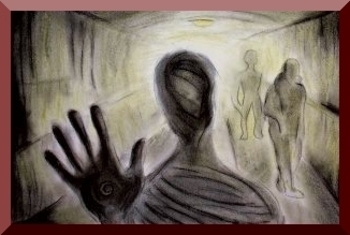 When I was in high school, I went on a band trip and stayed in a hotel room with 4 other girls. I was the first to get up so I could shower without rushing and when I got up to get my stuff, I had a strange feeling so I looked down the hall toward the bathroom and a tall shadow figure was right ahead of me.

And the longer I looked at it, I could tell it was slowly moving closer to me. It freaked me out so much I screamed and jumped in bed and flipped the light on.

I never saw it again until the other night. Now it’s been probably 8 or 9 years since that happened. I was outside taking my dog out when I looked at this well lit spot behind my house and saw the same figure again.

I could tell it was in front of the fence behind my house. I saw it that clearly. But being aware of feeding the energy, I looked away and tried to ignore it.

When I looked back it was gone. Every time I take my dogs out, they always stare behind my house, and one of my dogs in particular fixates on the exact spot I saw it in every time we go out.

Ever since I was a kid I felt like there was a spirit in my house, but since I moved I haven’t really felt that way about where I live except for the woods, they’ve just spooked me a bit at night.

And now that I’m pregnant I’ve been so much more aware of the potential of a dark energy around me again. I don’t look into dark corners and I always have a light on.

Now lately my mom has been accusing me of turning her electronics on when she’s not using her office and she saw an imprint in the guest bed and thought it was me, and today the TV turned on by itself as soon as I walked into her house.

I’m not sure what to think about all of this.