Man On My Couch 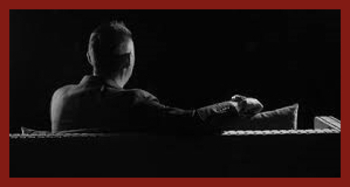 I’ve have more than my fair share of witnessing things many don’t believe exist.

I’m not a psychic, some of these things were witnessed by others who were with me.

I was in my 20’s and asleep, I got up to use the bathroom, as I walked into the hallway I glanced into the living room which was very dark because all the lights were off. I saw an image of a man sitting on the couch, I was shocked. The man or ghost was all black beyond any black I’ve ever seen in my life to this day and I’m now 66.

The man was like a living black hole. Around the edges of his body light was falling into him. He had a boundary around his body that was pulling in light. He was like a negative photograph. He stood up, I was able to make out details.

He had on a brimmed hat that was the common style in the 1940’s to the 1960’s. I could make out the sleeves of a sport jacket and the cuffs of trousers and sleeves. He walked towards our kitchen and I saw his arms swing, and his stride. I flipped on the lights and he was gone.

This happened 2 other times years later, same black hole or shadow man again. He was not a physical being, it was like he was from another dimension. I believe this ghost was my grandfather.

Several years later I saw him again. I was taking a nap upstairs and my wife was downstairs watching TV. I felt something touch my foot. When I opened my eyes I saw a black figure near my feet. I was terrified, I tried to rationalize that perhaps it was my wife playing tricks on me. I got up and he went down the stairs fast. I saw he was wearing a brimmed hat, that was in fashion many years ago. I ran down the stairs, my wife looked at me, I asked were is he? She said who? I said the man that came down the stairs. She did not know what I was talking about. Then I remembered I had seen him years before. I was shocked he followed me to another location.

I don’t feel he wasn’t there to harm me. I believe he was my grandfather whom I missed. I do believe there are angels, demons, ghosts, living orbs, UFO’s, and many things that science can’t explain yet. Our physical world is not everything. Only recently has science recognized Dark Energy, and Dark Matter.