Being In My Room 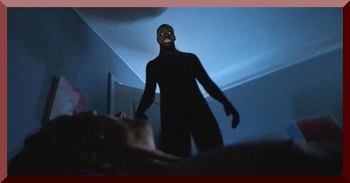 In my bed in our military base housing. My room was off the kitchen, and on the first floor. All other bedrooms were on second floor.

One night, my room filled with a greenish/blue light.

I remember feeling paralyzed. Awake but unable to move. Could barely lift my head and I saw a smallish creature, greenish or grey in color, standing at the foot of my bed. It was definitely humanoid, two legs, two thin long arms, a large head with huge round dark eyes.

It didn't talk, but communicated with me some other way. It told me to not be afraid. It just studied me. At one point it communiciated something like:

My inability to move was relaxed in on arm as it moved closer to me. I lifted my hand and tried to touch it. My finger seemed to go right through it's wrist or hand. There was a membrane but gelatin like flesh inside of it.

There was something else, I recall that there were holes of some sort in its palms.

That's all I remember. That paralysis occured on occasion during my teen years but no more visitations.

My father incidently was, according to family stories, involved in Blue Book. We lived at McChord A.F.B. from 1962-1969. I've seen his military record, what's available anyway, and he did work with OSI and was at times a special agent for the agency.