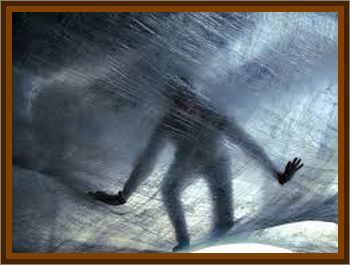 I’ve always been open spiritually especially as a kid and have seen ghosts and spirits before but its nothing compared to this shadow person I saw when I was 13.

For starters, I don’t even know what the hell these things are. I have done a lot of researching to try and make sense of these entities but I honestly have no idea. They are not ghosts or spirits I know that for sure.

What I saw was not something in the corner of my eye or something that looked white and transparent like I’ve seen previously these entities are basically a black mass, but anyway I’ll explain what I saw.

I was trying to sleep, tossing and turning and I turned over on my opposite side to face my doorway which was on the other side of the room. My door was wide open because I was a frightened kid especially of the night because I always saw shit and standing in my doorway was this black figure of a man about 6' tall.

The black figure of the man stood with his arms by his side and you could not see through him. It looked 3 dimensional. This figure didn’t have a hat or red eyes like I’ve read other people have saw on forums and stuff it was just a silhouette of a man.

I sat up as soon as I saw it and I stared at it for a good 5 seconds, mind you as strange as this is I wasn’t scared for some reason and I cant really explain why I think it was the shock of it or something. Anyway, I asked what’s wrong as I assumed it was my mother, when I got no reply I assumed it was my brother and asked the same thing and still no reply. By that point I had realised WTF was happening and shit myself and pulled the covers over my head. I looked up 10 seconds later and it was gone.