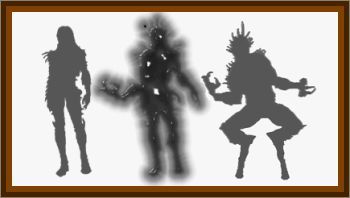 When I was in 6th grade as I recall, about 11 years old, I was invited to a BBQ at a local park by a fellow classmate. I live in Las Vegas, so parks tend to consist of: a playground, an adequate grass field for sports and a walkway surrounding. This particular park happened to be surrounded by 6' to 7' brick walls all around, except the front of the park which lead to the street, and a single doorway wide entrance opposite of that in the back, which lead to a neighboring apartment complex.

After a day of playing as most kids tend to, it was time to go home. We were tasked with collecting all of my friend’s younger brothers and sisters. There were 4 of us same aged kids actively looking for about 7 or so younger children. The park wasn't too huge and there was only 1 brick building which served as the restrooms by the front. The kids weren’t too hard to find.

But this is where things take a turn towards the paranormal. Halfway through the park we see a dark figure of what appears to be a small child. Thinking it was one of the siblings we were looking for, we naturally start running towards it. At this point the figure is making a dash toward the back of the park so we give chase and start yelling at the child to stop.

As this dark, black colored figure is reaching the end, the most messed up, completely spookiest thing I have ever seen in my life ensues next.

The dark child like figure turns white, starts running on all fours for like 10', runs up a tree like a cat, and uses the elevation to jump over the wall to the apartment complex. We run out of terror back to the front of the park. The figure was completely solid and I have 3 eyewitnesses that can my back my claim.